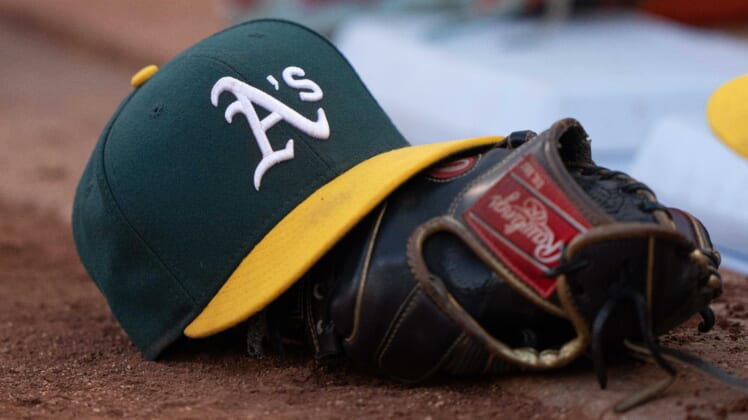 The Oakland Athletics have been in the news during the post-lockout MLB free-agency period for all the wrong reasons.

That includes the “small-market” team trading off core players such as Matt Olson, Matt Chapman and Chris Bassitt with more payroll-cutting measures set to take place in the coming days.

Behind the scenes, there’s an obvious backdrop here. MLB gave the A’s permission to seek relocation last year as things continued to look dire when it comes to a new stadium in Oakland. The one location bandied about the most, Las Vegas, now appears to be even more likely moving forward.

A’s president Dave Kaval said on Wednesday that the organization put in an offer for a fifth plot of land in the desert metropolis. Kaval detailed what the A’s are expecting and seemed to continue with the public stance that relocation could be in the cards.

“I think there’s some benefits to being similar to the Raiders’ setup. Where you’re still in the Resort Corridor, but it makes it a little easier for locals to get to. … But there are also really exciting opportunities to be right on the Strip. That’s kind of a Hallmark location.”

As the Athletics flirt with joining he NFL’s Raiders in Las Vegas, they are also attempting to work with city leaders in Northern California. Things don’t seem to be going too great on that front.

The Seaport Planning Advisory Committee did not recommend the ending of maritime use of the Howard Terminal. It’s a necessary step for the A’s to continue with plans to erect a $12 billion waterfont development in Oakland.

Ultimately, the San Francisco Bay Conservation and Development Commission has final say over whether the Howard Terminal location can be used for a new stadium. That vote could come as soon as June 2. A two-thirds vote is needed for the Oakland Athletics to move forward with the project.

Whether the Commission takes up the Seaport Planning Advisory Committee recommendation will likely play a large role in the Athletics’ final decision on relocation.

“The larger body is statutorily required to vote yes or no by July 7. If they voted no on July 7, the entire project would be dead,” Kaval said.

All of this comes amid a renewed belief that A’s baseball in Oakland is not viable without a new stadium. MLB has admitted that. the A’s themselves admit that. Their flirtation with Las Vegas adds another layer to this. Their current payroll purge is another clear indicator.

Kaval would not identify the five possible locations for a new stadium in Las Vegas. However, he did seem to rule out a plot of land owned by UNLV on Tropicana Avenue just east of the Las Vegas Strip.

As noted above, the A’s would consider building right on the strip to be the most-ideal end result here. For the organization, it could be all about timing and finding a plot in which construction can begin almost immediately.

“One of the key factors as we finalize this site is the timing,” Kaval said. “Sites that have already been thoughtfully designed and/or planned for, have a leg up. “Some of the other options may require demolition or other things that are going to require longer. You have to weigh that, because that could be another year before you can open.”

The A’s Triple-A team is playing in the Vegas suburb of Summerlin. The NFL’s Raiders relocated from Oakland to Las Vegas ahead of the 2020 NFL season. It’s now looking more and more like the Oakland Athletics could be headed to Sin City, too.