Notre Dame hopes to have starting quarterback Jack Coan available next weekend after he departed Saturday’s 41-13 rout of No. 18 Wisconsin in Chicago with an injured left ankle.

Fighting Irish coach Brian Kelly said X-rays were “clean.” Kelly doesn’t think the injury is serious and he expects Coan to be available when No. 12 Notre Dame (4-0) hosts No. 8 Cincinnati next Saturday.

“It’s a soft-tissue injury,” Kelly said. “It doesn’t even respond like a high ankle sprain, so we’re pretty optimistic that we’ll be able to see him back next week.” 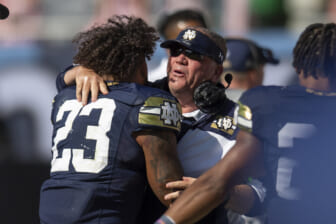 Coan exited in the third quarter with the contest tied at 10. The Fighting Irish scored 31 points in the fourth quarter to beat Coan’s former school.

Drew Pyne replaced Coan but Kelly made it clear there will be no quarterback controversy.

“Jack Coan is our starter,” Kelly said. “If he’s physically able, he’ll be our starter against Cincinnati.”

Coan was 15-of-29 passing for 158 yards and one touchdown before exiting. He has thrown for 986 yards, nine touchdowns and two interceptions in four games. 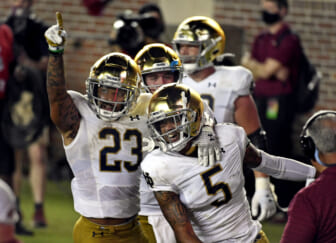 Coan, a graduate transfer, is in his first season at Notre Dame after four seasons with the Badgers.