The Notre Dame Fighting Irish lost nine players to the 2021 NFL Draft and have a rather difficult 2021 schedule ahead of them in head coach Brian Kelly’s 12th year at the helm.

Kelly has led the proud program to a 43-8 record over the past four seasons. However, they’ve made an effort to schedule quality opponents, and it may leave them out of the College Football Playoff after making it two of the last three years.

All our predictions are based on the Fighting Irish starting these key players:

Notre Dame is counting on Wisconsin transfer Jack Coan to lead the offense after losing Ian Book to the New Orleans Saints. Book excelled as a three-year starter and was the winningest quarterback in the program’s storied history. That’s quite an act for Coan to follow, but having a special tailback in Kyren Williams will help a lot.

It’ll probably take the Irish a while to get in sync offensively due to the immense amount of turnover that’ll be discussed at greater length a little later. At least for the regular-season opener, it shouldn’t be much of a problem against Florida State. Williams should run all over the Seminoles and drive Notre Dame to a confidence-boosting Week 1 triumph on the road.

Yes, Toledo went 4-2 in the MAC last year, and its two losses were by only three points apiece. This is an entirely different situation, though. Can the Rockets really expect to go into South Bend and keep this contest competitive? Will believe it when it is seen.

It’s strange that Boilermakers QB Jack Plummer is from Arizona and isn’t related to Jake “The Snake.” Anyway, Plummer will have to play at an NFL-like level for Purdue to knock off the Irish at Notre Dame Stadium. Chances are, that won’t happen, and seeing top weapon Rondale Moore move on to the pro level doesn’t help.

It’s a bad break that the Irish didn’t get Wisconsin at home. Instead, it’ll be a neutral site duel at Soldier Field in Chicago. This has all kinds of fun implications, since Coan is going up against the true sophomore who beat him out in Badgers QB Graham Mertz. Since the younger signal-caller has more upside, and this contest isn’t in South Bend, we’re going to give a slight edge to Wisconsin here.

The Bearcats have a very real defense, headlined by lockdown cornerback Ahmad Gardner. They’ll be facing an Irish offense that lost three offensive line starters to the NFL Draft, is now without Book, and saw tight end Tommy Tremble and its top two receivers, Javon McKinley and Ben Skowronek, go pro as well. None of that bodes well against a Cincinnati team that returns fourth-year starting QB Desmond Ridder.

The Hokies lost an exciting dual-threat quarterback in Hendon Hooker, who transferred to Tennessee. Now, they’ll turn to Braxton Burmeister to lead their passing attack. Burmeister has shown scattershot accuracy during his limited collegiate action across a couple years at Oregon and last season at Virginia Tech. Not much to inspire confidence that the hosts can hang with Notre Dame. 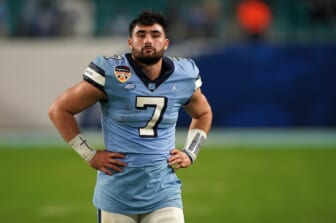 USC is not the most fun opponent to face off a bye. Trojans field general Kedon Slovis is going to be in a chess match all game with stud Notre Dame safety Kyle Hamilton. Chances are, Slovis is going to get the upper hand, because the Irish aren’t strong enough in other key areas on their defense to defend what should be an excellent USC passing attack.

Sam Howell just lost all his significant skill position players to the NFL, yet the Tar Heels quarterback is still widely believed to be the No. 1 overall pick in the 2022 NFL Draft. It’s just hard to see the Irish overcoming such a big gap at the most important position on the field, and in the end, Howell should make enough plays to help UNC win.

The Baltimore Ravens’ home venue will host this rivalry showdown between Notre Dame and Navy. It’s always tough to defend the Midshipmen’s triple option rushing attack, because they can eat up time of possession and essentially shorten the game. That said, Williams’ running ability and the Irish’s superior talent should help them win the battle in the trenches well enough to pull this one out.

This isn’t a road trip the Irish can completely take for granted. Virginia did defeat North Carolina in 2020, hung tough with the Miami Hurricanes and bested Louisville, too. That said, again, this Notre Dame team is going to be angry over all the losing earlier in the slate, and should manage to best the Cavaliers.

Georgia Tech is still in the midst of a massive rebuild. There’s no reason why Notre Dame shouldn’t come into this one riding a winning streak of at least two. That’s a brutal combination the Yellow Jackets won’t be able to overcome, particularly away from home.

If Davis Mills had stayed at Stanford, this one might’ve been really juicy, as there’s a real chance he could’ve been playing to be a first-round pick in 2022. Instead, the Cardinal may trot out a freshman at QB in Tanner McKee, and even at home, it’s a lot to put on someone so young to pull out a quality win in the regular-season finale.