Naturally, one of the top storylines from Week 4 is the stunner by North Carolina State. Seeing Dabo Swinney’s Clemson Tigers taken down delighted social media and will have a huge impact on the ACC moving forward. Saturday’s action also delivered statement victories from Notre Dame, Baylor and Arkansas with each program sending a different message to the football world.

Let’s examine our winners and losers from a wild college football Week 4 slate.

There are ways to break Notre Dame’s record for most coaching wins and there’s what Brian Kelly did in college football Week 4. Notre Dame traveled to Soldier Field to face the Wisconsin Badgers as underdogs. If you told everyone Jack Coan would leave with an injury and the Fighting Irish would be forced to start a third-string quarterback, most would expect the Badgers to tear this team to shred.

Instead, the opposite happened. After Wisconsin took a 13-10 lead seconds into the fourth quarter, Notre Dame responded with 31 unanswered points. Chris Tyree returned a kickoff for a touchdown, backup quarterback Drew Pyne threw his first touchdown, Notre Dame’s defense used two pick-sixes to put this one away. An emphatic victory for Notre Dame and a memorable, historic win for Kelly.

Replacing a legendary quarterback is impossible to begin with. DJ Uiagalelei, taking over the throne from Trevor Lawrence, had historic shoes to fill all for a national powerhouse. Many thought the five-star recruit from the 2020 recruiting class could pull it off. Needless to say, the results thus far haven’t been great. 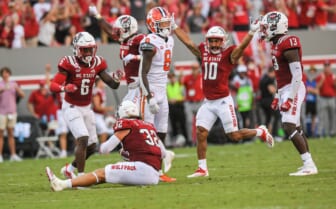 The concern with Uiagalelei isn’t just Saturday’s performance (12-of-26, 46.2% completion rate) and 44.9 QBR). In four starts this season, the sophomore has completed just 56.2% of his 112 attempts for 586 passing yards (5,23 ypa) and a 3-3 TD-INT ratio. Plenty of blame falls on the offensive line and an inconsistent rushing attack, which are crucial for an inexperienced quarterback to be successful. But, as of now, Uiagalelei looks nothing like a future NFL quarterback.

Dave Aranda took the job at Baylor knowing there would be an adjustment period. It showed during the COVID-impacted 2020 season as the Bears finished 2-7. In his second season on the job, we’re quickly seeing his impact on the program and the latest results were highlighted in Saturday’s upset victory over Iowa State.

After Baylor’s offense dominated its opponents for weeks, we saw this team successful with a different script in Week 4. The Bears’ rushing attack finished with just 118 yards on the ground, averaging a mere 3.6 yards per carry. But a 98-yard kickoff return touchdown by Trestan Ebner and this defense’s ability to limit Brock Purdy (263 passing yards, 62.1 QBR) made the difference on Saturday. Upcoming games against Oklahoma State and West Virginia should be victories, setting up a marquee ranked-vs-ranked matchup against BYU on Oct. 16.

If Graham Mertz is the best option at quarterback for Wisconsin, things will get a lot uglier in 2021. College football Week 4 provided the latest evidence that this sophomore quarterback is not ready to be a starter at this level and the numbers make it blatantly clear.

It would be one thing if Mertz made bad decisions frequently and had great accuracy to overcome it. But through three starts this season, the 6-foot-3 quarterback has completed just 54-of-95 attempts with four interceptions. Keep in mind, he’s also thrown more touchdowns to his opponents than teammates. Michigan’s defensive backs should be ready to catch some passes in Week 5.

College football Week 4 might have delivered some quarterback controversy in the SEC. The Auburn Tigers grew tired of Bo Nix missing receivers and being inaccurate for long stretches during a game. So, they pulled the plug while trailing Georgia State. It’s a decision that possibly saved the Tigers’ season and created excitement for the future. 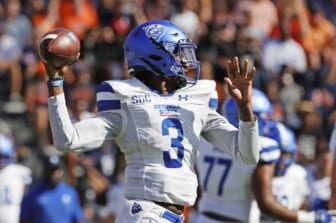 Trailing 24-19 with just over three minutes remaining at the game, Auburn’s offense started from its 2-yard line. TJ Finley, who transferred from LSU, showed up in the biggest moment. The 6-foot-7 quarterback led the Tigers on a 98-yard drive, picking away at the defense with quick throws and gaining yards on the ground. With 45 seconds remaining, he found Shedrick Jackson in the end zone on fourth down for the game-winning touchdown. At the very least, there needs to be a quarterback battle in camp this week.

It’s a good thing the College Football Playoff isn’t expanding this year. The Big Ten and ACC routinely send their marquee programs to the CFP Semifinal and others are always in contention. Through the first four weeks of the college football season, there’s very little to suggest either conference deserves representation this year.

While Ohio State can compete in shootouts, its run defense doesn’t exist and there are also issues in the secondary. Wisconsin was just decimated in a single quarter by Notre Dame, who many doubted coming into Saturday. Even the teams that won didn’t make a strong impression. Michigan barely escape with a home victory over Rutgers, Iowa trailed Colorado State at halftime and Penn State’s victories over Auburn and Wisconsin look less impressive now. We’ll do Michigan State a favor and barely mention the Nebraska game. 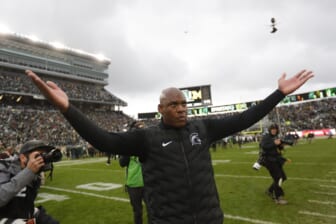 We’ll say this, at least the Big Ten looks better than the ACC. Clemson is evidently in a down year and already sitting at two losses, its playoff hopes are dead. North Carolina already fell short of preseason expectations and Wake Forest hasn’t faced a quality opponent. When the committee holds its first meeting, they can forget the Big Ten and ACC.

It’s time to give the Arkansas Razorbacks the respect they’ve earned. Sam Pittman took over a program that went 8-28 in its last three seasons before he took over. After using the 2020 season to implement his plan and to start building a roster with his guys, the results thus far are incredible.

KJ Jefferson, a four-star recruit, showed a lot to the national world in Week 4. The sophomore quarterback played through a knee injury, helping Arkansas jump out to a 17-0 lead before it really started impacting him. With their top quarterback hurt, the Razorbacks’ defense held No. 7 Texas A&M t seven points in the second half. We’re not expecting Arkansas to beat Georgia next Saturday, but college football Week 4 taught us this is a program on the rise.