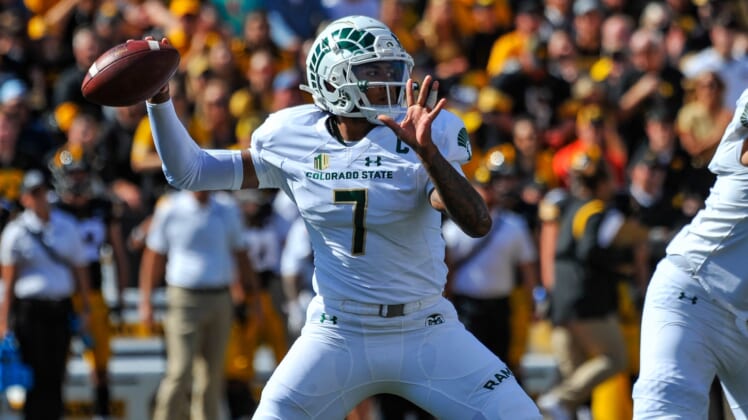 Spencer Petras threw a pair of touchdown passes Saturday as No. 5 Iowa recovered from a halftime deficit to post a 24-14 victory over Colorado State in Iowa City.

Keagan Johnson and Sam LaPorta each had a TD catch for the Hawkeyes (4-0), who were favored by more than three scores after beating two ranked foes (No. 17 Indiana, No. 9 Iowa State) in their first two games and trouncing Kent State in last week’s contest.

But things did not come easy for Iowa, which barely outgained Colorado State (278-262) and lost the time of possession battle, 31:18 to 28:41. The Rams (1-3) converted nearly half of their third-down opportunities (11 of 23), while the Hawkeyes managed to convert only four of their 13 chances on third down.

Colorado State’s Todd Centeio was 16 of 30 for 155 yards with a passing touchdown and a rushing score.

Trailing 14-7 at intermission, Iowa took advantage of a fumble by A’Jon Vivens that gave the Hawkeyes the ball just 6 yards from the end zone. On the next play, Tyrone Tracy Jr. scored to draw the hosts even at 14-14 midway through the quarter.

The Rams did nothing on their next possession and Charlie Jones returned the ensuing punt 38 yards to set up the Hawkeyes, who needed only three plays to cover 41 yards. Petras capped the short drive on a 27-yard hookup with a wide-open LaPorta.

Following a scoreless first quarter, Iowa got on the board early in the second as Petras found Johnson streaking down the right sideline for a 43-yard touchdown.

Colorado State drew even with 3:55 to go in the half as Centeio scored on a 10-yard run.

On the next drive, Petras was intercepted by Robert Floyd, who returned the ball 62 yards to the Iowa 23. Centeio cashed in with 24 seconds remaining in the half as he found Gary Williams for a 3-yard TD.