WATCH: No. 19 Michigan survives rough second half, holds off Rutgers 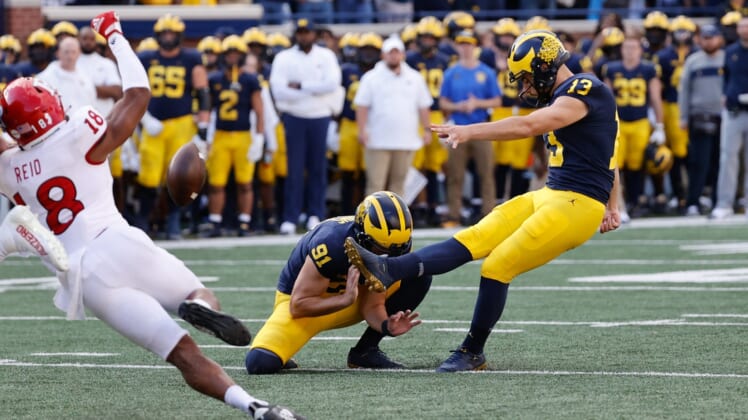 Blake Corum had 68 rushing yards and Haskins added 41 for the Wolverines (4-0 overall, 1-0 Big Ten) in their conference opener. Cade McNamara completed 9-of-16 passes for 163 yards for Michigan, which was held scoreless in the second half.

The Wolverines opened with a methodical 17-play, 74-yard drive that took 7:36 off the clock in the first quarter. Haskins finished it off with a 1-yard run.

Rutgers had the ball for 13 plays on its first possession but had to settle for a 40-yard field goal from Valentino Ambrosio.

Michigan required only four plays to drive 71 yards on its next possession. The big play was a 38-yard completion from McNamara to Roman Wilson. Haskins finished it off with a 3-yard run.

The Wolverines extended their lead to 14 points with just over four minutes left in the half on Jake Moody’s 32-yard field goal.

The Scarlet Knights tried to convert a 4th-and-10 from Michigan’s 44 in the final minute. It failed and the Wolverines took advantage. A 51-yard pass from McNamara to Mike Sainristil set up Moody’s 20-yard field goal.

Michigan gained just 14 yards and failed to pick up a first down in the third quarter. Meanwhile, Rutgers put together a 91-yard drive to cut the Wolverines’ lead to 10.

A roughing the passer penalty moved Rutgers inside the Wolverines 20-yard-line. Vedral then found Aaron Young wide open on a 14-yard scoring pass.