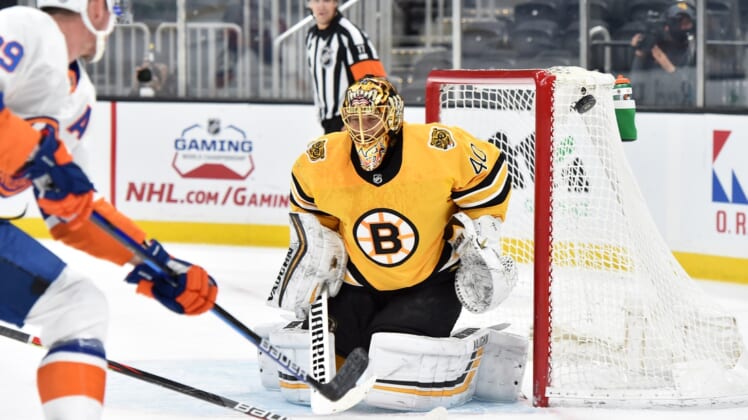 Craig Smith scored a power-play goal in the first period and Taylor Hall tallied in the third for the Bruins, who defeated the Islanders for the first time in six meetings this season. The teams will square off again in Boston on Friday.

Rask made 22 saves in his return to action since exiting after the first period of the Bruins’ 4-3 overtime loss to the Islanders on March 25 with an upper-body injury.

New York got a goal from Travis Zajac, and Semyon Varlamov stopped 41 shots.

Mark Scheifele added a goal and two assists for the Jets, who have won five of their past six games. Neal Pionk added two assists. Winnipeg’s Connor Hellebuyck made 31 saves.

John Tavares had a goal and an assist and Alex Galchenyuk also scored for Toronto. Maple Leafs goaltender Jack Campbell allowed three goals on six shots before being replaced by David Rittich in the first period. Rittich made 16 saves.

Artemi Panarin collected two goals and an assist as host New York cruised to a shutout win over New Jersey.

Panarin posted his third multi-goal game of the season. He has 10 goals in 18 games since returning March 13 from a two-week absence for personal reasons.

Jacob Trouba and Ryan Lindgren scored in the opening 6:39 as the Rangers improved to 11-4-3 in their past 18 games. New York remains four points behind the Bruins for the fourth and final playoff spot in the East Division.

Anders Bjork had one goal and one assist, and goalie Dustin Tokarski made 27 saves to earn his first win in more than five years.

Sam Reinhart, Victor Olofsson and Casey Mittelstadt also scored for the Sabres, who improved to 5-2-2 in the nine games since ending their 18-game losing streak.

The Capitals saw their three-game winning streak end, and they finished the season series with a 6-1-1 record against Buffalo. Washington got goals from Dmitry Orlov and recently acquired Anthony Mantha.

Petr Mrazek needed to make only 19 saves to help Carolina break a two-game losing streak by defeating Nashville in Raleigh, N.C. Mrazek is 3-0-1 since returning from a layoff of more than two months because of a thumb injury.

Warren Foegele, Andrei Svechnikov, Vincent Trocheck and Sebastian Aho had the goals for Carolina, and Svechnikov and Trocheck each supplied an assist.

Nashville’s Erik Haula scored a short-handed goal in the third period. Goalie Juuse Saros made 25 saves for the Predators, who lost for just the fourth time in 17 games.

Claude Giroux and Sean Couturier scored in a shootout to give Philadelphia a win at Pittsburgh.

Jakub Voracek scored in regulation for the Flyers, who had lost two straight and four of five. Carter Hart stopped 31 shots for the victory.

Sidney Crosby scored in regulation for the Penguins, who had won three in a row, and Tristan Jarry made 26 saves.

Troy Stecher notched the first two-goal game of his career and Jakub Vrana scored in his Detroit debut in a win over visiting Chicago.

Vrana was acquired from the Washington Capitals at the trade deadline on Monday. Michael Rasmussen also scored for the Red Wings, and Marc Staal had two assists. Detroit goalie Thomas Greiss stopped 24 shots.

Duncan Keith scored for the Blackhawks, and Kevin Lankinen made 24 saves.

Denis Gurianov posted two goals and an assist as Dallas scored four unanswered for a home victory over struggling Columbus.

Miro Heiskanen and Joe Pavelski also scored while Jake Oettinger made 17 saves to improve to 4-0-1 against the Blue Jackets this season.

Jack Roslovic scored his ninth of the season, but Columbus managed just 18 shots on goal. Elvis Merzlikins stopped 27 for the Blue Jackets, who have lost four in a row (0-3-1).