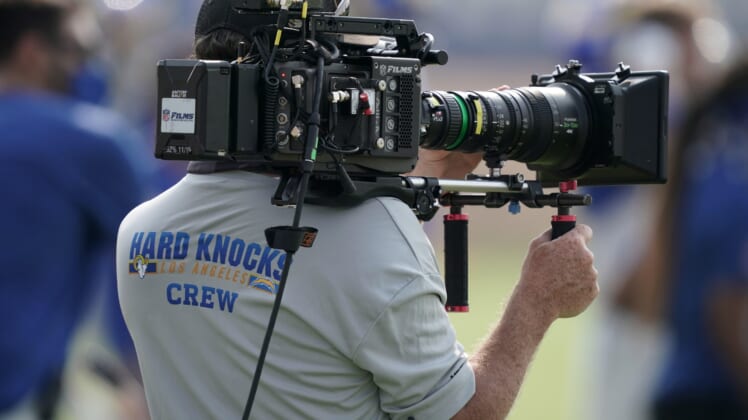 Coming out of Week 1, the NFL was experiencing a significant dip in ratings with viewership down for some of the league’s biggest games to kick off the 2020 season. Not only did NFL games take a hit, but “Hard Knocks” also suffered its least-watched season in history.

The NFL got creative this summer by featuring the Los Angeles Rams and Chargers, the first time two teams were the focal points of a “Hard Knocks” season. While the idea was unique, for various reasons, one of the best yearly docuseries in sports was a massive bust among viewers.

It was immediately a bad sign for the NFL and HBO when the season premiere of “Hard Knocks” saw its viewership crater, especially compared to the massive ratings the show held in 2019. Unfortunately, the problem worsened as the season unfolded.

According to Sports Business Journal’s Austin Karp, the third episode of “Hard Knocks” set another record low with only 179,000 viewers tuning in. At the time, it was the least-watched episode in the show’s history, marking a 29% from the second episode and “Hard Knocks” saw a 66% ratings hit from the first three episodes the year prior.

A five-episode run, which featured one episode dedicated to teams talking about systemic issues within the United States and being a part of league-wide protests, never found its footing. When the latest season of Hard Knocks came to a close, it averaged only 243,000 viewers. It was a 63% drop in viewership from 2019, via Sports Media Watch, with that season averaging nearly 650,000 viewers.

The lack of interest in “Hard Knocks” this season isn’t all that surprising. With the elimination of preseason games and so many COVID-19 storylines, the content wasn’t exactly compelling for football fans. Meanwhile, HBO had to compete with NBA and NHL games, taking even more attention away from sports fans.

While we got at least one great story from this season, it wasn’t enough to save “Hard Knocks” from a disastrous year. We can only hope things are more normal in 2021 and the show becomes entertaining once again.

NFL ratings: Viewership down for NFL early in 2020 season

The “Hard Knocks” ratings might have been a sign of things to come for the NFL. While there was plenty of excitement following an offseason that saw big moves across the league, we haven’t seen the level of interest reflected in ratings to begin the season.

It started rough for the NFL in Week 1 with the first game of the 2020 season. Following a peaceful protest, then a moment of unity by the Houston Texans and Kansas City Chiefs, the NFL Kickoff Game took a massive ratings hit.

The problem continued for the NFL in Week 1 on “Sunday Night Football”, when a primetime battle between the Dallas Cowboys and Los Angeles Rams was met by a steep dip in viewership. Even the league’s “Monday Night Football” doubleheader crashed in the ratings compared to the 2019 season.

Coming out of Week 1, the NFL likely hoped fans would be reminded about football and things would start to tick up. However, a Week 2 “Thursday Night Football” clash between the Cleveland Browns and Cincinnati Bengals didn’t exactly help the league’s ratings.

While the first official TNF game of the 2020 season saw a slight uptick in viewership compared to last season, it still didn’t draw a massive audience. That’s especially important for the NFL, given the potential revenue hit this year caused by the COVID-19 pandemic and reduced stadium attendance.

Things can still turn around quickly for the NFL. More fans are streaming games than ever before, advertisers are more desperate than ever to display their products in front of millions of eyes staying at home and there is still a hunger for live sports. We’ll just have to see if the NFL ratings start to recover, potentially even repeating the historic marks the league enjoyed during the 2020 NFL Draft.