On June 21, 1997, the WNBA played their first game in league history seeing the New York Liberty take a 67-57 win over the Los Angeles Sparks. Fast forward 23 years and 364 days, and both teams met a day before the anniversary of their historic meeting.

History would repeat itself with the New York Liberty coming out on the winning side by the score of 76-73.

The win snaps a two-game losing streak for the Liberty, improving their record to 7-6. They now take sole possession of fourth place in the WNBA standings, ahead of the Chicago Sky and Washington Mystics.

Meanwhile, the Sparks have now lost their last two and four of their last five games, dropping to 5-7 on the season.

Sabrina Ionescu struggled in her second game back from a two-game absence, shooting 2-of-8 from the field while scoring nine points.

Erica Wheeler arguably had her best performance this season for the Sparks, finishing with 20 points on 60% while adding 10 assists, six rebounds and three steals.

Kristi Toliver and Nia Coffey each scored 15 points while Brittney Sykes came off the bench to post 10 points and seven steals.

Sykes’ seven steals are the most by a Sparks player since August 2015 when Candace Parker recorded eight steals. It is also the most steals by a player coming off the bench since May 2012 when Matee Ajavon recorded seven steals for the Washington Mystics.

The win comes in spite of the Liberty’s inability to take care of the basketball committing 29 turnovers to the Sparks’ 18. This includes nine turnovers from Betnijah Laney.

Despite 11 straight points from Erica Wheeler, the Sparks were unable to take advantage ending thw first quarter down 21-18.

Both teams struggled to take care of the ball in the opening quarter with the Liberty recording seven turnovers and the Sparks with five.

After trading the lead back-and-forth for most of the second quarter, the Liberty began to build a lead in the tail end of the period finishing on a 9-2 run in the final 4:30. Rebecca Allen scored 14 points in the first half for the Liberty.

The Liberty continued their run into the third quarter building a 14-point lead within the first three minutes.

However, the Sparks would get themselves back in the game thanks to nine turnovers in the quarter by the Liberty tying the game up 58-58 going into the fourth quarter. Brittney Sykes recorded four of her seven steals in the third quarter including two in the final 30 seconds. 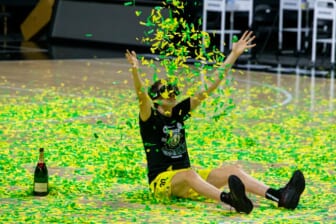 With 24.8 seconds remaining in the game, the Liberty led 74-73. Kristi Toliver had an opportunity to give the Sparks the lead but her three-point attempt was blocked by Rebecca Allen. In the midst of the defensive stop, Toliver was called for a foul on Allen leading to her knocking down two free throws.

With one more chance to tie the game with 8.2 seconds remaining, Allen came up with another blocked shot this time on Wheeler. A subsequent three-pointer was missed by Nia Coffey clinching the win for the Liberty.