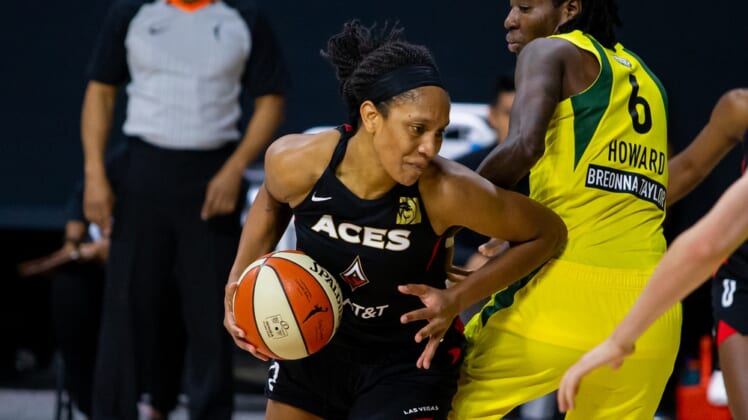 The Las Vegas Aces have now taken sole possession of second place in the WNBA standings following a 100-78 win over the New York Liberty.

The Aces are tied with the Seattle Storm for the longest active win streak in the WNBA at four games improving their record to 9-3. They are also tied with the Connecticut Sun for the best home record in the league at 5-1.

Meanwhile, the New York Liberty, playing without Sabrina Ionescu, dropped to 6-5 following the loss. They have now lost four of their last five games with three of them coming by 10 or more points.

Kelsey Plum was one of five players for the Aces that scored in double figures finishing with a career-high 32 points on 69% shooting along with five rebounds and two steals. In the five games prior to this, Plum had scored 40 points in five games.

Dearica Hamby filled the stat sheet off the bench with 16 points, six rebounds and four assists. Liz Cambage recorded her fourth double-double this season with 14 points and 11 rebounds.

Jazmine Jones led the Liberty coming off the bench to score 17 points. This is the second game this season where both team’s leading scorers came off the bench. 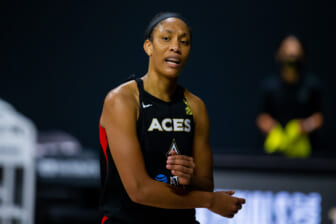 The Liberty had control of the game for the majority of the first half, peaking in the second quarter when they led 39-28 with 5:50 remaining.

However, the Aces outscored them 20-6 to end the half leading 48-45.Kelsey Plum and Dearica Hamby scored 13 and 11 points respectively in the first half.

The third quarter saw the Aces go on an 18-7 run in the final five minutes to take a 73-60 lead into the fourth quarter. The Liberty struggled to take care of the basketball in the quarter committing six turnovers.

The Aces carried their momentum into the fourth quarter holding a double digit lead the entire period peaking at 23 points.