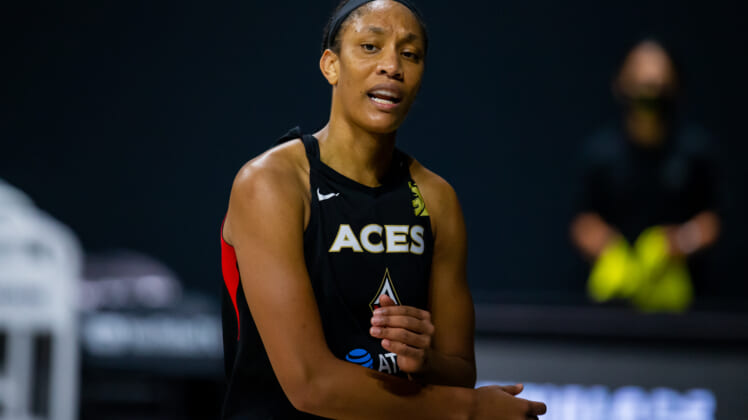 The Las Vegas Aces put an end to the Dallas Wings’ three-game win streak by virtue of an 85-78 victory on Sunday. This gave them their third straight win, improving their record to 8-3.

Following the Connecticut Sun’s loss earlier on Sunday to the Seattle Storm, they and the Aces are now tied for the second-best record in the WNBA. Meanwhile, the Wings drop below .500 with their record sitting at 5-6.

A’Ja Wilson had a monster game for the Las Vegas Aces, putting up 28 points, 14 rebounds, three assists and two blocks. This was her third double-double in a row and fourth so far this season.

Satou Sabally, the Dallas Wings’ second overall pick in the 2020 WNBA Draft, led them with a season-high 21 points and seven rebounds. Isabelle Harrison came off the bench to record 13 points, nine rebounds and two steals.

It was an off night for Wings leading scorer Arike Ogunbowale who managed just 11 points on 2-of-11 shooting although she did add eight assists and two steals. Marina Mabley put up 10 points, four rebounds, three assists and three steals.

The Las Vegas Aces snatched the momentum in the game’s opening quarter building a 10-point lead in the tail end of the period. The Wings were able to trim the lead down to five at the end of the quarter thanks to 10 points from Satou Sabally.

The Wings rode the momentum from their run to end the first quarter into the second, eventually taking back the lead midway through. The remainder of the quarter saw both teams trade the lead back-to-back ending with the Aces up 43-41.

In the second half, A’Ja Wilson went to work by scoring 19 of her 28 points, including a 12-points third quarter. Despite her efforts in the third, however, the game was still within reach for the Wings as the lead was just two for the Aces going into the fourth.

The Aces looked to create separation to start the fourth scoring the first six points of the period. The Wings continued to battle and with 2:28 remaining, the score read 77-75 with the Aces leading.

From there, the Aces would go on an 8-0 run culminated by five straight points from Liz Cambage including her first three-pointer made this season to put the game away.