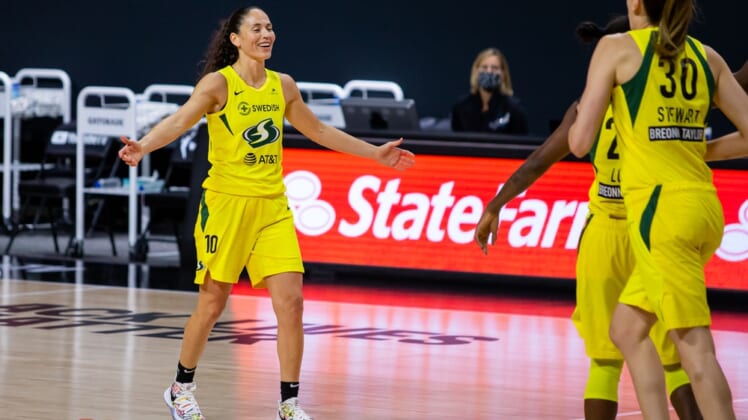 In a matchup of the top two teams in the WNBA, the Seattle Storm came out with an 89-66 road win over the Connecticut Sun. The Storm are the only team that has not lost a road game so far this season with their record improving to 5-0 with the win.

The win is the Storm’s third in a row, becoming the first WNBA team to win 10 games this season. The Sun, on the other hand, now drop to 8-3 on the season.

Breanna Stewart led the Storm finishing with 22 points, nine rebounds, five assists and three steals (all game-highs). She was extremely efficient from three-point range, shooting 4-of-5 from deep.

Jewell Loyd failed to score in double figures for the first time this season, dropping just seven points on just 3-of-9 shooting and 1-of-5 from three-point range.

The Sun were playing without reigning Eastern Conference Player of the Month Jonquel Jones who will miss at least the next four games while playing in the FIBA Women’s Eurobasket for Bosnia. The Connecticut Sun started their 2021 second-round WNBA Draft pick Dijonai Carrington in her place. She finished with four points and seven rebounds in 15 minutes.

DeWanna Bonner and Kaila Charles each scored 14 points for the Connecticut Sun while Brionna Jones finished with 12 points, two blocks and two steals.

The loss of Jonquel Jones was felt early as they struggled to keep up with the WNBA’s second-highest scoring team ending the first half down 43-29. The Storm’s ability to capitalize off Sun turnovers was key as they scored 21 points off 12 Sun first half turnovers. Meanwhile, the Sun were only able to score seven points off six Seattle Storm turnovers.

While the Sun were able to score more efficiently in the third quarter, shooting 63% from the field in the period, they were never able to make the game close trailing by as many as 26 points.