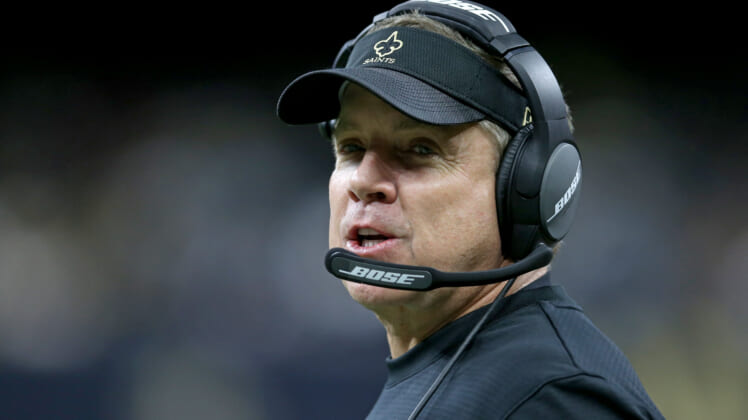 New Orleans Saints head coach Sean Payton is retiring just one year after the Saints watched Drew Brees walk away. Facing the reality of needing both a new head coach and franchise quarterback, the upcoming offseason in New Orleans will be fascinating.

For only the second time since Mickey Loomis took over football operations, a Saints coaching search is underway. New Orleans made the right call in 2006, hiring the Dallas Cowboys assistant head coach to take over. Months after hiring Payton, the Saints went 10-6, won the division and reached the NFC Championship Game.

With Payton stepping away, the Saints will become the eighth NFL team to join the coaching carousel this offseason. While that will put them behind other clubs who are making hires and on second interviews, this is a great destination.

Let’s take a look at some of the top New Orleans Saints coaching candidates now that Sean Payton has officially retired.

We’ve already seen Dennis Allen lead the New Orleans Saints once before, on an interim basis. After Payton tested positive for COVID-19, Allen stepped in as head coach against the Tampa Bay Buccaneers. On a primetime stage, with the Saints’ offense doing nothing, Allen’s defense held Tom Brady to 184 net passing yards, recorded four sacks and shut out one of the NFL’s best offenses. In the last four regular-season meetings against New Orleans, Allen’s scheme held Brady to a 71.45 passer rating with 13 sacks taken and eight interceptions.

In a search for Payton’s replacement, continuity and relationships inside the locker room will play an important factor. Allen has spent the last seven seasons in New Orleans, overseeing one of the league’s top defenses through yearly salary-cap releases and roster overhaul. He’s also someone Cam Jordan, one of the Saints’ leaders, doesn’t want to leave.

“Is he allowed to leave (for another job? I’m going to do the opposite. What can I say bad about him? I’m not helping him leave.”

Allen’s first stint as a head coach (Oakland Raiders, 2012-’14) went poorly. But we’re seeing teams become more comfortable with awarding second chances to those who have earned them. Given Allen’s relationships inside the organization, it’s no surprise Ian Rapoport disclosed that Allen would be a top candidate.

There are few better feelings for an organization than when it becomes clear they hired the right head coach. One thing that makes it an even better moment, knowing you also made your rival worse in the process. Bruce Arians might be the public face of the Buccaneers’ offense, outside of Brady, but Leftwich is the play-caller who both men say is instrumental to the offense.

Before we even highlight some of the important qualities that make Leftwich a future head coach, his success as a play-caller is also notable. The numbers his offenses are putting up are about a lot more than Brady. The statistics are certainly better, but Leftwich’s offenses performed well in 2019 with Jameis Winston starting.

Among the biggest reasons for Leftwich’s success are his work ethic, intelligence and ability to look out for his players’ best interest. One of his former teammates describes Leftwich as one of the smartest players he’s ever been around. He also receives glowing endorsements from strong endorsements from Arians and a Hall of Fame quarterback, with Brady highlighting Leftwich’s ability to analyze film and create a game plan from Brady’s perspective.

This is also the same coach, as shared by LeSean McCoy, who considers players’ contract incentives. That goes a long way in a locker room. All of those qualities, with the Buccaneers’ success offensively, make Leftwich a fantastic candidate for the New Orleans Saints.

Aaron Glenn won’t be atop many Saints’ coaching lists. He just finished his first season as a defensive coordinator and the Lions didn’t perform exceptionally well. Detroit allowed the fourth-most total yards )379.8) and second-most points (27.5) per game this season. On top of that, the defense surrendered a 45.1% third-down conversion rate.

But so much of that is a product of Detroit’s rebuild and a lack of talent on either side of the ball. In matchups against Kyler Murray and Lamar Jackson, Glenn’s scheme did very well. Before joining Dan Campell’s staff, Glenn coached the Saints’ defensive backs (2016-’20) and played an instrumental role in the development of Marshon Lattimore and Marcus Williams.

He’s widely-respected across the NFL, interviewing for the Broncos’ head-coaching vacancy this year. Given his familiarity with the Saints’ front office, Glenn is a name to keep an eye on. If Payton only coaches for one more season, Glenn becomes an even likelier candidate to replace him in 2023.

The NFL world is still waiting for Eric Bieniemy to finally become a head coach. He’s interviewed countless times but never landed the gig. New concerns within league circles circulated in December 2020, both pointing to his lack of experience as a full-time play-caller and a history of red flags earlier in his career.

In 1991, Bieniemy’s license was suspended for a year following repeated infractions. He later received an on-campus ban from the University of Colorado for harassing and assaulting a parking lot attendant. In addition, he was arrested for DUI in 2001. Bieniemy also worked on Colorado’s coaching staff when the program had multiple players facing rape allegations.

But each of those concerns hasn’t stopped others with the same red flags from becoming an NFL head coach. Mike Vrabel had legal issues early as an adult and the cover-ups in college by Urban Meyer are alarming. As for not calling plays, it didn’t stop Matt Nagy, David Culley, Joe Judge, Zac Taylor and Nick Sirianni from landing head-coaching gigs.

With those red flags addressed, there’s not a ton that needs to be said about Bieniemy as an offensive coordinator. He carries a strong endorsement from Andy Reid and Patrick Mahomes raves about him. But there is one more detail that makes this seem perfect.

There’s another reason to like this fit. New Orleans runs through Bieniemy’s roots, as detailed in Nola.com’s Luke Johnson’s profile. He was born in New Orleans and while his family moved away in 1979, it still holds an important place in his heart.

“The root of who we are, where we’re from, it’s right there,”

If Sean Payton retires, the New Orleans Saints would be wise to hire Eric Bieniemy. Bringing him home and replacing one great offensive mind with another is the perfect start to a new chapter for this franchise.