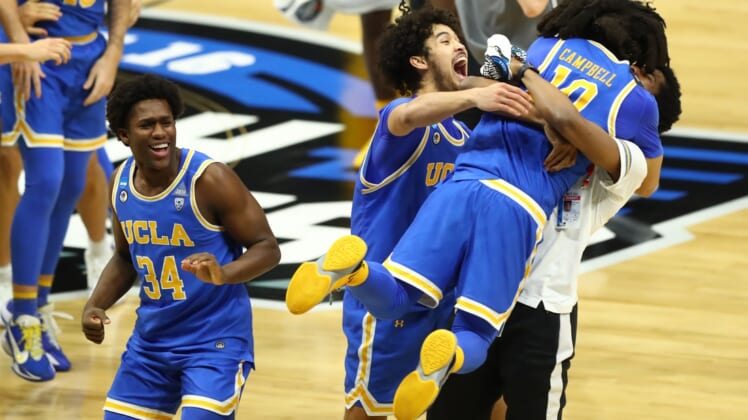 UCLA is cultivating a reputation as a giant-beater with back-to-back NCAA Tournament wins over second-seeded Alabama and top-seeded Michigan, but now comes the toughest assignment for any college basketball squad.

The 11th-seeded Bruins are tasked with upsetting ferocious, high-powered and unbeaten Gonzaga for a spot in the national title game when the teams square off Saturday night at the Final Four in Indianapolis.

UCLA (22-9) has won 11 national championships but is a heavy underdog against the top-seeded Bulldogs (30-0), who are two victories from becoming the first undefeated national champion since Indiana in 1976.

Gonzaga coach Mark Few has been attempting to deflect the history talk for much of the past three months and he did so again after Tuesday’s dominating 85-66 win over Southern California.

“Everyone wants us to keep moving forward, but that’s not how we roll,” Few said. “This is a heck of an accomplishment. We’re going to take it and savor it for what it is. That doesn’t lessen our desire to win this game, the next game or win two more games.

“We’re wise enough to know these are really, really special times. These are great accomplishments, and they need to be celebrated. That’s how we’re approaching it right now.”

The winner will face either top-seeded Baylor or second-seeded Houston in Monday’s title contest.

Gonzaga has notched 34 consecutive victories dating back to last season. The Bulldogs have also won a Division-I record 27 straight games by double digits.

So it would rank as quite an upset if the Bruins are on the floor Monday as few people expected them to make a run after losing four straight games prior to the tournament.

But five wins later, UCLA joins Virginia Commonwealth (2011) as the only teams to go from the First Four to the Final Four. It is the 19th time in program history that the Bruins have advanced to the Final Four.

Fueling the march has been Kentucky transfer Johnny Juzang, whose 28 points were more than half the team’s output in Tuesday’s 51-49 triumph over Michigan.

“It’s such a beautiful thing, the way that we have come together for this postseason,” said Juzang, who is averaging 21.6 points in the five wins. “It’s just a feeling of everybody’s just so unified. It’s like one unit, and we’re just all sharing in each other and rooting for each other. I think that’s why we’re at this point.”

While Juzang carries the Bruins, Gonzaga packs star power in the trio of Corey Kispert, Jalen Suggs and Drew Timme.

Timme scored 23 points against USC while Suggs put together a stellar all-around game of 18 points, 10 rebounds and eight assists. Kispert added 18 points and eight rebounds to help the Bulldogs reach the Final Four for just the second time in school history — the other was in 2017 when they lost to North Carolina in the national title game.

The Final Four stage is exactly where Suggs — likely off to the NBA after his freshman season ends — was aiming to be when he chose the Zags.

“It’s hard not to think about it,” Suggs said of possibly going unbeaten. “We try to keep our minds off of it and keep focused on the task at hand. It’s a great accomplishment. Again, we just come in every day to play to the Gonzaga standard and for each other. We’re not chasing anybody or anything.”

UCLA is ahead of schedule in the building project under second-year coach Mick Cronin by reaching the Final Four for the first time since 2008 when the Ben Howland-coached squad reached that level for the third straight season.

In fact, there was a lot of criticism when the Bruins hired Cronin, who had spent the previous 13 seasons at Cincinnati and advanced as far as the Sweet 16 on just one occasion.

“This is great, but we’ve got work to do,” Cronin said. “And, you know, hopefully I’ll be around to keep trying to chase the tradition and the expectations at UCLA.”

The Bruins and Gonzaga have met twice previously in the NCAA Tournament with the teams splitting a pair of Sweet 16 matchups.

The 2006 contest rates as one of the more memorable comebacks in recent NCAA Tournament history as the Bruins scored the final 11 points to record a 73-71 victory. Gonzaga’s collapse left star Adam Morrison crying, face down, on the court.