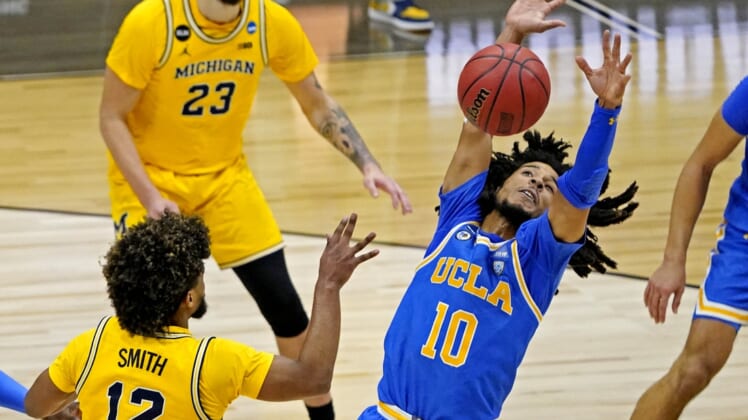 Juzang made 11 of 19 shots from the field and Tyger Campbell added 11 points as the Bruins (22-9) advanced to the Final Four for the first time since 2008. UCLA is 5-0 in the tournament and joins VCU in 2011 as the lone schools to go from the First Four to crashing the Final Four.

Michigan (23-5) had two chances to win in the final seconds.

Mike Smith missed a 3-point attempt that bounced off the rim with 1.8 seconds left. After the ball went out of bounds and was awarded to the Wolverines with 0.5 seconds remaining, Franz Wagner’s 3-point try was off the mark as time expired.

“These guys get all the credit,” Bruins coach Mick Cronin told CBS. “Unbelievable heart, toughness. Nobody picked us, nobody believed in us. That’s how we like. Obviously, we know our next assignment is tough.”

Neither team scored for nearly three minutes before Juzang hit a jumper to make it 50-47 with 1:05 left. Wagner sank two free throws to move Michigan within one with 44 seconds remaining.

UCLA led by four at halftime and quickly increased its advantage to 34-25 as Campbell made two baskets and Juzang hit three free throws after being fouled while shooting a trey attempt with 18:15 left.

Juzang exited 58 seconds later after aggravating a right ankle injury, and the momentum quickly turned as the Wolverines ran off eight straight points. Dickinson began the spurt with two straight baskets before Juzang returned with 15:20 left.

Eli Brooks later drove for baskets on back-to-back possessions as Michigan moved within 34-33 with 12:35 remaining.

A 10-4 run gave Michigan a 43-42 lead on Smith’s 3-pointer with 7:06 left. Campbell and Bernard answered with baskets to give the Bruins a three-point lead before Chaundee Brown Jr. drained a 3-pointer for the Wolverines to tie it at 46 with 5:22 remaining.

At one point, the Bruins missed 10 consecutive shots and trailed 11-4 before Juzang got rolling with a personal run of 12 straight UCLA points.