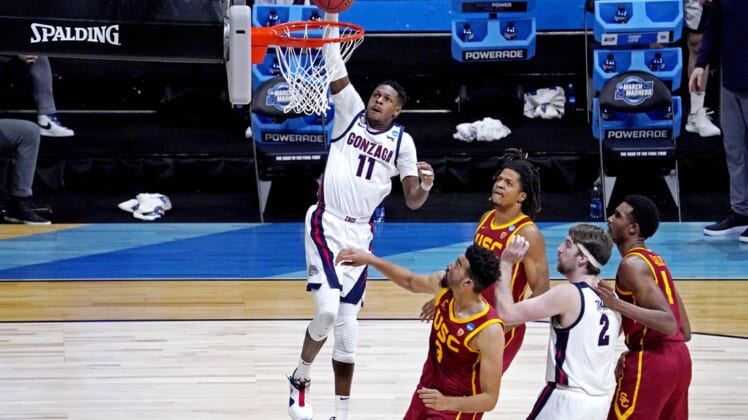 Drew Timme recorded 23 points and three steals and top-seeded Gonzaga never trailed while rolling to an 85-66 victory over South California in the NCAA Tournament East Regional final on Tuesday night at Indianapolis.

Jalen Suggs registered 18 points, 10 rebounds and eight assists as Gonzaga (30-0) advanced to the Final Four for just the second time in school history. The Bulldogs are two wins away from becoming the first undefeated national champion since Indiana in 1976.

Gonzaga will face either Michigan or UCLA on Saturday in the national semifinals.

“We came out and battled today and all played together as a unit,” Suggs said on CBS. “It was so much fun. I love being part of this journey and we’re not done yet.”

Corey Kispert contributed 18 points and eight rebounds as the Bulldogs increased their Division I record of consecutive double-digit wins to 27.

Gonzaga has won 34 consecutive games dating back to last season.

Gonzaga made 50 percent from the field, including 7 of 21 from behind the arc. The Zags owned a 41-29 rebounding edge.

USC won its first three NCAA Tournament games by an average of 21.3 points but was no match for Gonzaga’s onslaught.

The Bulldogs controlled the game from the outset with seven straight points and holding a 17-4 advantage just 5 1/2 minutes into the contest.

Trojans coach Andy Enfield called two timeouts to try to stem the tide to no avail as Gonzaga stretched the lead to 36-15 on Kispert’s layup with 6:03 left in the half.

USC showed some life with eight straight points to trail by 13 but the Bulldogs answered with a strong finishing burst to lead 49-30 at the break.

Gonzaga increased the lead to 58-35 on Timme’s two free throws with 16:49 remaining in the game. Suggs later hit a jumper to make it 69-45 just past the midway point.

The Trojans never got closer than 17 the rest of the way.

Just more than four minutes into the contest, veteran referee Bert Smith collapsed and was taken off the court on a stretcher. The NCAA later said Smith had a medical issue and was alert and stable.