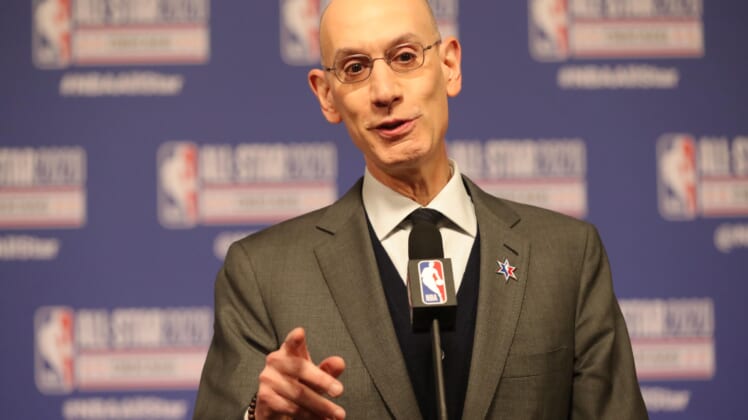 Major League Baseball delivered a smashing success with its “Field of Dreams” game, generating massive interest from fans and stellar TV ratings. Now, the NBA could reportedly be looking into a similar regular-season showcase at a special site.

MLB at Field of Dreams, a regular-season game played on Aug. 12, honored the 1989 film Field of Dreams. Located in Dyersville, Iowa, it generated a huge audience for Fox and many baseball fans loved it. With MLB already scheduling another game for next year, it seems the idea might be spreading to different sports.

During an interview on “The Crossover” podcast, NBA executive vice president of basketball strategy & analytics Evan Wasch shared that the league is considering something similar.

“We’ve explored it, and we’ll continue to talk about it. Obviously, the “Field of Dreams” game was incredibly successful. So, no surprise it has sparked some discussions, and it’s worth exploring. But the logistical challenges of a basketball game outside are just significantly more than a baseball game, which, of course, is already outside.”

Naturally, it’s a bit more complicated for the NBA. Only four games in league history have been played outdoors, with Indian Wells hosting a preseason contest between the Phoenix Suns and Dallas Mavericks in 2010. But league officials moved on from the outdoor games due to the challenges created by weather.

That’s one of two concerns Wasch pointed to, explaining why it will likely take the league some time to determine if an outdoor regular-season game becomes a possibility.

“The biggest concern is the basketball one you highlight, that whether it’s blacktop and injury concerns or a wooden court outside with humidity concerns and moisture that can get on the court, being beholden to rain, all of those of things become a consideration.”

While conversations seem to be at the early stages, there are two obvious candidates to host an outdoor NBA game.

Rucker Park, located in Harlem, Manhattan, is iconic for its ties to basketball history. Viewed by many in the area as the real mecca of basketball, stars like Kevin Durant, Allen Iverson and countless others have put their talent on display for fans to see. While playing on a blacktop might cause some injury concerns, plays and fans would love the environment and homage to basketball history.

The basketball courts at Venice Beach are another ideal option. Some of the best outdoor courts in the United States are located in Venice and there are ties to the film White Men Can’t Jump. Venice Beach could be the perfect location for a Los Angeles Clippers vs Los Angeles Lakers battle.