Brewers fans watch the playoff game Sunday afternoon at the Fiserv Forum’s Oktoberfest. The game was broadcast on the MLB Channel which many fans did not get on their home TVs. Brewers 1

Major League Baseball returned to a sense of normalcy in 2021 and the MLB ratings this season provide plenty of reason for optimism and concern for the future of the sport.

When the COVID-19 pandemic hit in 2020, MLB commissioner Rob Manfred to postpone the start of the season. As league officials and teams prepared for a shortened 60-game season without fans, everyone knew it would come at a significant cost to annual revenue.

MLB lost $1 billion in revenue in 2020, a figure that would have been even worse if not for players taking reduced salaries, the postseason expanding and the league permitting some fans to attend the World Series.

The return of a 162-game schedule and fans being welcomed back into stadiums will help the entire league. But a look at the MLB ratings shows how the future of baseball is changing.

Beginning in March 2021, many regional MLB games shifted from FOX Sports networks to Bally Sports. A result of the merger between FOX and Disney, rights to regional broadcast coverage were sold to Diamond Sports Group, with involvement from Sinclair Broadcast Group.

As detailed by Forbes’, the change has had a direct impact on MLB ratings. Because Bally Sports doesn’t have agreements with YouTube TV, Sling TV and Dish, it loses out on a significant percentage of a potential audience. The results have led to regional ratings dropping in several markets.

While viewership is up compared to the 2020 season, MLB has seen its league-wide household average fall 12% when comparing the 2021 and 2019 seasons. Of the 29 markets, 12 saw drops in TV viewerships across households.

Sinclair is reportedly exploring a direct-to-consumer launch for the 2022 MLB season, which would allow fans in their respective regions to purchase access to games for the regular season. With MLB’s heavily criticized blackout rules, which prevent fans in several areas of the country from seeing multiple teams, this could be a way for viewership to increase next year.

When Major League Baseball announced its plans for a game to honor the classic baseball film “Field of Dreams”, everyone was excited. The COVID-19 pandemic delayed the showcase game for a year, but the Chicago White Sox and New York Yankees delivered a thriller. 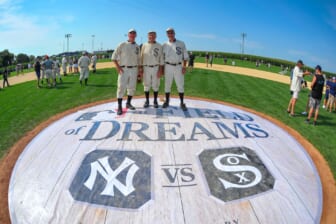 The most promoted game on the MLB schedule all season promised to be a hit for fans in attendance and watching on television. Sure enough, per Fox Sports’ executive vice president Michael Mulvihill, the unforgettable moment delivered.

The metered market rating immediately indicated the audience size would likely be the highest for a regular-season game since 2005. Fox saw a 135% increase from the typical overnight rating it saw for a standard broadcast.

Even before the numbers came in, MLB announced that two teams would return to Dyersville, Iowa in 2022. While commissioner Rob Manfred didn’t reveal which teams would play, Chicago Cubs skipper David Ross already let it slip that his team would be taking part.

Considering the massive success of this game, it’s a safe bet that MLB will look to expand on it in the future. The league could host multiple games at the stadium, featuring some of the most popular teams. In an effort to maximize ratings, it could broadcast one game on Fox for the network’s Saturday broadcast and then play a second game on ESPN’s Sunday Night Baseball.

Troubling signs for World Series, some reasons for optimism

Fox has been MLB’s primary broadcast partner since 1996. The network extended its media rights contract in 2018, agreeing to a seven-year deal worth $5.1 billion. It marked a notable increase over the previous agreement, expiring after the 2021 season, which paid MLB $4.2 billion across eight years for 52 regular-season games, the MLB All-Star Game, two Division Series, one League Championship Series and the World Series.

As the broadcasting fee skyrockets, World Series ratings are dropping. While MLB has seen some fluctuation from 2000-’19, the 2020 World Series finished with troubling numbers.

Given MLB playoff ratings also dipped in 2020, both the league and network needed viewership to rebound in 2021. Thus far, the MLB ratings for regionally broadcasted games on Fox have been a mixed bag.

Viewership is dependent on the variety of options fans have to choose from and the specific matchup being featured. One thing that helps build a lasting audience is star power. Moving forward, there is some hope in that regard for baseball.

Fox will be MLB’s primary broadcast partner for years to come, but the league’s ties with ESPN are changing. 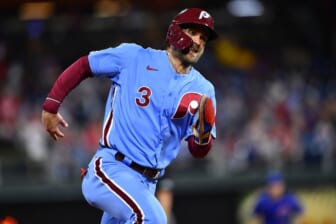 But as MLB ratings and its popularity dipped in recent years, ESPN focused its resources on the NFL and NBA. That is reflected in the recent deal the network signed with MLB.

ESPN and Major League Baseball signed a new extension in May, with the network exclusively broadcasting 30 regular-season games per year through 2028. The seven-year deal begins in 2022 and grants ESPN exclusive rights to broadcast any expansion to the MLB Wild Card round. The postseason is expected to be expanded in the next collective bargaining agreement.

The network’s decision was likely made after evaluating its viewership. Ratings for Sunday night’s weekly broadcast dipped in 2020 and have steadily decreased in recent years. However, things are looking up in 2021..

During the All-Star Break, MLB announced that ratings for Sunday Night Baseball are up 26% compared to the 2020 MLB season.

ESPN is never going to see the audience it pulls in for Monday Night Football, averaging nearly 12 million viewers per game. But this season’s numbers are promising for the game.

As detailed by Ken Rosenthal, ESPN is paying less under the new seven-year deal ($3.85 billion) than under the expiring eight-year contract ($5.6 billion). Losing $150 million per season is significant, but MLB could still come out ahead.

With all of this in mind, let’s examine what the MLB ratings mean for baseball’s future.

With the help of young stars like Shohei Ohtani and Fernando Tatis Jr. MLB ratings improved for the Home Run Derby and the numbers rose for the All-Star Game.

One huge positive for MLB, per SportsMediaWatch, this was ESPN’s most-watched broadcast since the College Football Playoff National Championship Game. At a time when ESPN has pulled back on some of its MLB broadcasts, the success of the derby is significant.

With Ohtani leading off for the American League and starting on the mound, there was more interest in this year’s MLB All-Star Game. As a result, viewership rose compared to the 2019 event.

It’s an improvement for baseball, but there is one slight cause for concern. It was still the second-smallest audience in recorded history for the MLB All-Star Game. For the sake of comparison, via Sportico’s Anthony Crupi, ratings over several decades highlight the declining popularity.

Before other sports exploded in popularity, MLB ratings for the All-Star Game averaged 22-plus million in the early 1990s.

One important trend, per SportsMediaWatch, MLB ratings for the Home Run Derby have been higher than the ALl-Star Game in three of the past four years among the 18-49 demographic.

There are small positives for baseball, largely tied into the growth of streaming. MLB.TV, which allows fans to watch out-of-market games, is quickly gaining in popularity. Furthermore, YouTube is broadcasting 21 games in its third season partnered with MLB.

It’s at least a sign that the league is navigating its way through modernizing sports. But key issues are preventing this game from growing.

Plenty can be made of the MLB ratings on cable and what it means for the game’s future. If comparing it to other pro sports, the NFL lost more viewers from one Sunday Night Football game to the next than any MLB regular-season game drew this year.

Baseball will never return to its peak as America’s Pastime, both the NFL and NBA evolved much faster. While the league started falling behind before Manfred took over, nothing he has done very little to inspire confide for baseball’s long-term outlook. Meanwhile, the NBA and NFL secured a stranglehold of the future with younger fans.

The effects of this still haven’t really hit yet. MLB smashed its revenue record in 2016, blew past that mark in 2018 and the league still cried poor after setting a new record ($10.7 billion) in 2019.

There are several driving forces behind this, a majority of which fall on the shoulders of Manfred and league officials.

Part of this problem was recently highlighted by ESPN’s Stephen A. Smith, who wrongly blamed Shohei Ohtani for not speaking English and his need for an interpreter harms the game. For years now, MLB has utterly failed to market its stars.

Ohtani, Tatís Jr, Vladimir Guerrero Jr. are the future of baseball and their roots across the globe, along with their ability to speak multiple languages, make them the perfect faces for MLB. Plus, they all embrace the type of game this sport should become, where players are encouraged to have fun and let loose.

Declining interest in baseball doesn’t fall on the players’ shoulders, it’s because MLB and commissioner Rob Manfred have made done nothing to attract more fans, especially a young audience.

The 2021 season has also sparked debate about issues on the field, namely the rising strikeout rate and the drop in batting average. MLB ratings are surviving the historic decline in run production for now, but the stats this season hint that might not last for long.

Baseball’s launch angle revolution has played a part in the sport changing, but the weight of its impact is receivng too much attention. A greater issue, one that MLB has ignored until now, is the use of sticky substances that many players viewed as the biggest scandal in sports.

Pitchers already held a massive advantage, with hitters being the ones that had to react. Modern technology, allowing pitchers to fine-tune their mechanics and spin rate, has made hitting a baseball harder than ever. There’s nothing Manfred can do about pitchers taking advantage of tracking data and advanced coaching to improve their game, but MLB must be accountable for the rise in three-outcome ABs.

Extreme defensive shifts and hitters’ focusing on power, which MLB contracts incentivize, aren’t the league’s biggest problem. If teams are limited to specific defensive positioning on the field and hitters are the only ones asked to change, the issue won’t go away. That only comes if MLB eliminates what has become the equivalent of pitchers on steroids.

MLB must adapt to survive. League officials must do a far better job marketing baseball’s biggest stars, especially those who will be the face of this sport for years to come. Manfred must start cracking down this season on pitchers using substances to enhance their pitches and umpires.

At a time when there is uncertainty about whether or not Manfred even likes baseball, there is an opportunity to fix the game. Moving the pitching mound back (currently being tested in the Atlantic League), creating more opportunities for stolen bases (spike after rule changes in A-ball) and limiting the size of pitching staffs are all long-term solutions to help solve a problem.

But actions need to be taken down. If not for the fans, who want to see more entertaining three-hour games, then for MLB ratings and revenue. Because if nothing is done, networks will begin to realize broadcasting MLB games isn’t worth the price when baseball can’t build a relationship with its future audience nor produce an entertaining game.