The 2022 NBA Draft Thursday evening started out with a huge surprise as the Orlando Magic selected Duke’s Paolo Banchero with the No. 1 pick. Former Auburn star Jabari Smith was the odds-on favorite to land with Orlando. To say it was a shocker would be an understatement.

The rest of the top-six played out like we had envisioned with Sportsnaut’s top-six players landing within that range. However, the long-downtrodden Sacramento Kings surprised many by going with Keegan Murray over Jaden Ivey at four. Meanwhile, the Detroit Pistons pulled off a major coup.

Below, we give you our five biggest winners and losers from the 2022 NBA Draft Thursday evening.

Jabari Smith was our No. 1 overall player on the board leading up to the draft. For pretty much the past few weeks, it was a foregone conclusion that he’d go first overall to the Orlando Magic. Once Paolo Banchero landed in Florida and Chet Holmgren found himself in Oklahoma City, the Rockets pounced. Talk about finding a pro-ready talent with an elite skill-set and someone who can turn into a true star.

The Rockets were not done with their haul during the NBA Draft, adding two more first-round picks to the mix — all bringing value with them to Houston.

General manager Rafael Stone nabbed high upside forward Tari Eason from LSU with the 17th selection. His 6-foot-8 frame and 7-foot-2 wingspan enables the former Tigers star to guard multiple positions at the next level. It doesn’t hurt that Eason averaged 16.9 points and 6.6 rebounds on 52% shooting as a sophomore last season.

Not to be outdone, Houston also picked up former Kentucky guard TyTy Washington with the 29th selection. He was our 14th-ranked player heading into the NBA Draft. The Rockets were also able to acquire multiple future second-round selections by moving down from the 26th selection with Minnesota.

Based on our big board, Denver simply didn’t find value with either of its two first-round selections. This isn’t to say that Christian Braun (21st) and Peyton Watson (30th) can’t be good players. Rather, it’s all about value.

We had Braun ranked 35th and Watson coming in at 39th — both projected to be second-round selections. Despite leading Kansas to the NCAA title last season, there’s a lot of questions about Braun’s upside. Meanwhile, Watson averaged a mere 3.3 points on 32% shooting as a freshman for UCLA in 2021-22. The upside is here. The floor is also incredibly low.

We questioned Detroit trading forward Jerami Grant to the Portland Trail Blazers for a package centering around a 2025 first-round pick on the eve of the draft. After stealing Purdue guard Jaden Ivey with the fifth selection, these questions were answered.

Detroit flipped that pick in a three-team trade with the Charlotte Hornets and New York Knicks that landed it th 13th overall selection. With said pick, the Pistons added stud center Jalen Duren of Memphis. The cost? The aforementioned 2025 first-round pick and taking on Kemba Walker’s contract (for now).

That’s two players we had in our top-12 without the Pistons exhausting future draft capital when factoring in the Grant trade. Add in the cap savings that came with the Grant deal, and these Pistons can go after Phoenix Suns star center Deandre Ayton. Just imagine a core group of Cade Cunningham, Jaden Ivey, Saddiq Bey, Duren and Ayton. That sounds all sorts of sexy.

Rumors swirled around the Kings leading up to Thursday’s NBA Draft. Would general manager Monte McNair trade the fourth pick for proven talent as a way to help new head coach Mike Brown? Perhaps, the team would simply go best-player available with Purdue’s Jaden Ivey despite having two starting guards in De’Aaron Fox and Davion Mitchell.

Instead of using this fourth selection for leverage, Sacramento went with the safe pick in former Iowa star forward Keegan Murray. We have nothing against Murray (he was our No. 5 prospect). Rather, it’s all about the Ivey dynamic here.

As we saw on Thursday after Detroit selected Ivey at five, a number of teams selecting later in the first round were lining up to acquire the former Purdue standout. If the Kings had opted to call their bluff and taken Ivey at four, they likely could have landed a bounty in return. That didn’t happen. And it’s another reason why Sacramento boasts the longest playoff drought in the NBA. 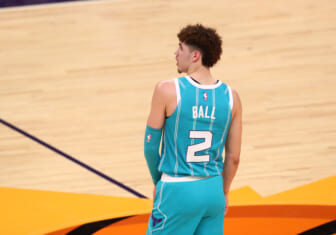 This former Duke standout center was drawing some attention as a potential top-10 pick after his brilliant performance in the NCAA Tournament. There was no reason to believe Williams would last to 15 after Charlotte dealt the 13th selection. But with big men falling in this one, that’s exactly what happened.

We’re talking about a high-upside center who displayed rim-running and defensive talents with the Blue Devils. He also fits a position of need inside for Charlotte with the team perimeter-centric.

Not to be outdone, Charlotte was also able to turn the 13th selection into a future first-round picks and four future second-round selections — giving the team a ton of assets to find another star next to LaMelo Ball.