A year ago, Keegan Murray was a role player for the Iowa Hawkeyes. In the present, Murray is coming off an astounding sophomore season to the extent that he’s a likely top-10 selection in the 2022 NBA Draft.

Murray showcased an all-around skill set in college. He defended and hit the boards at a high level, ran the floor, was an efficient shooter and scored in varying ways. Murray’s skill set fits any NBA team. He’s a versatile two-way player.

Here are three ideal landing spots for Murray relative to where teams are selecting.

3. Keegan Murray to the Indiana Pacers

The Pacers have a lot of flexibility this offseason with the No. 6 pick, a handful of prime trade candidates (Malcolm Brogdon, Myles Turner and Buddy Hield) and a compelling young nucleus. Murray would add to their core and be a day one starter.

In thought, Indiana’s backcourt is set for next season with Tyrese Haliburton and Chris Duarte, though, the latter could likely play small forward. They also have athletic big men Jalen Smith and Isaiah Jackson. The Pacers need a frontcourt scorer, which Murray can become.

Murray can bang in the paint, get grimy buckets around the basket and occasionally stretch the floor. All the while, he has knack for forcing turnovers on the other end of the floor. Murray beefs up a retooling Pacers team on the defensive end while adding a plug-and-play offensive skill set.

All that said, the Pacers may prefer to get someone who will frequently operate with the ball in their hands, as Murray likely figures to be more of an interior player in his rookie season given his 6-foot-8 frame.

2. Keegan Murray to the Houston Rockets

The Rockets are deep in youth out on the wing (Jalen Green, Kevin Porter Jr. and Garrison Mathews) and have an interior players to boast about in Alperen Sengun. They need a long-term ball-handler and players who complement their roster’s strengths. Murray helps with the latter.

Green and Porter are perimeter scorers and figure to build on that skill set moving forward. Head coach Stephen Silas’ offense needs another impactful player on the offensive end. Murray would be an integral part of the Rockets’ rotation.

Likely slowing the game down a bit, Murray would get a lot of points in the paint while getting clean looks when Green draws a double-team. Murray will have every chance to sharpen his offensive game, starting at either the three or four. He also adds a fundamentally sound defender to a team severely lacking on that end.

The factor that could stop the Rockets from selecting Murray, though, is them preferring to attain an immediate go-to scorer, as opposed to someone who may take some time to become such a threat.

The Trail Blazers are attempting a daring reboot. The backdrop of this process is Portland hiring a new president and head coach, trading CJ McCollum, being without Damian Lillard for most of this season and missing the NBA Playoffs within the last year. While there’s merit behind them trading the No. 7 pick, Murray would be a tremendous fit in head coach Chauncey Billups’ rotation.

Working under the mindset that the Trail Blazers have a healthy Lillard and Anfernee Simons (he’s a restricted free agent this offseason) to go with the recently acquired Jerami Grant, Murray can hit the ground running. Yes, Murray’s game is suited to be more of an interior threat in his rookie season because Murray’s game is somewhat based on what defenses throw his way. With that said, he will be Portland’s at-best number three scorer, meaning he’s not the focus of defensive attention.

Lillard is an elite scorer, Simons flashed the potential to be an All-Star scorer after McCollum was traded and Josh Hart was superb in his brief time with Portland this season. Plus, the Trail Blazers have roughly $20 million in cap space to improve their roster this offseason. Murray would be a complementary scorer, benefiting from the attention that Lillard and Simons attract. He also improves one of the worst defensive teams in the NBA of late.

Murray’s game has the ability to adapt on the fly. He begins as a glue piece, gradually growing into an impact player on both ends. This would be tough for the Trail Blazers to pass on. 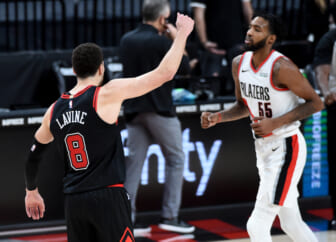