Paolo Banchero, one of the premier prospects in the 2022 NBA Draft, lived up to the hype in his lone season at Duke. The forward showcased an assertive offensive game. He used his 6-foot-10 frame to get inside off the dribble and finish through defenders while posing a respectable perimeter threat.

Banchero’s strong suit is attacking the basket, but many NBA players have that same ability. Can he be elite in that regard at the next level? Nonetheless, Banchero has the upside to be a featured part of an NBA offense.

Here are three ideal landing spots for Banchero relative to where teams are selecting.

3. Paolo Banchero to the Indiana Pacers

Working under the mindset that one or multiple of Malcolm Brogdon, Myles Turner and Buddy Hield are traded, the Pacers will have a bevy of current and future first-round selections, which can be used for them to move up from No. 6. Banchero would be a tremendous fit in head coach Rick Carlisle’s offense.

Tyrese Haliburton and Chris Duarte figure to be the team’s starting backcourt with at least one of big men Jalen Smith and Isaiah Jackson getting the starting nod next season. The Duke product gives the Pacers an ideal scorer to plug in-between the aforementioned players.

Banchero’s offensive tendencies, that being attacking the basket and thriving on physicality, complement the Pacers’ establishment. With Haliburton, Duarte and potentially Smith out on the perimeter, Banchero will have room to attack off the dribble. Meanwhile, Banchero playing in isolation figures to occasionally draw a double-team and create an open perimeter look for Haliburton or Duarte. He gives the Pacers a frontcourt scorer, a vacant skill set in their rotation.

All that said, the Pacers may prefer to let the chips fall where they may in the draft, as they have plenty of ways to rework their roster this offseason.

The Spurs face a pivotal offseason. They’ve missed the first round of the Western Conference Playoffs for a third consecutive season and have traded/lost a handful of vital players (DeMar DeRozan and Derrick White) over the last year. Moving up for Banchero would be an impactful play for San Antonio.

Dejounte Murray has become one of the best all-around floor generals in the NBA. The problem? He’s the Spurs’ only premier scoring threat and could be on the trade block. Keldon Johnson, Devin Vassell and Joshua Primo have certainly had their moments, but they haven’t proven themselves to be go-to scorers. Banchero has that upside and would be an optimum fit with the Spurs’ core. 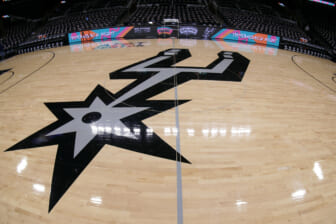 Banchero becomes an integral part of the Spurs’ offense from the jump, potentially serving as their number two scorer. Furthermore, they would have a complementary offense. Murray handles the rock with Vassell stretching the floor, Banchero and Johnson attacking the rack and big man Jakob Poeltl living in the paint. They’d have a mix of scoring, shooting and two-way play with five players who haven’t entered their prime.

Banchero gives the Spurs a much-needed scoring lift. The factor that could stop the Spurs from trading up for Banchero, though, is them preferring to acquire a proven, impact player.

1. Paolo Banchero to the Houston Rockets

The Rockets are in the midst of a raw rebuild, and Banchero is a raw talent. This is a match.

Houston’s rebuild is heavy on the wing with former No. 2 overall pick Jalen Green, Kevin Porter Jr., Garrison Mathews and Jae’Sean Tate holding down rotation roles. They also have the versatile Alperen Sengun in the paint following the Christian Wood trade. A big-bodied frontcourt scorer like Banchero would advance the Rockets’ offense.

The Rockets don’t have a true number one scorer. While Green could very well become such a player, they need more viable scoring options. Banchero and Green could feed off each other. The former plays in isolation while the latter stretches the floor. Plus, both players are capable of making an impact in the other’s role.

The Rockets need to accumulate as much talent as possible. Banchero fits the bill and is precisely the type of scorer and player they need. He gives them a scorer to operate in-between their young guards and big men. The puzzle pieces fit, and their returning players can build on the 2021-22 campaign. 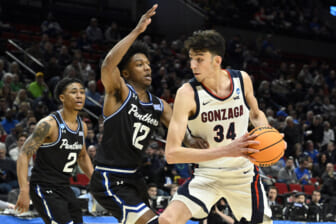