According to Bleacher Report’s Jake Fischer, the San Antonio Spurs are listening to trade offers for point guard Dejounte Murray. Fischer notes that San Antonio seeks a trade package similar to what the New Orleans Pelicans received for Jrue Holiday in 2020 (three first-round draft picks and a proven player).

If indeed available, Murray offers a sturdy long-term point guard. He does a little bit of everything. Murray is adept at scoring off the dribble, hitting the boards at a high clip, facilitating for his teammates and making an impact on the defensive end. He has improved some element of his game every season.

3. Dejounte Murray to the Minnesota Timberwolves

The Timberwolves have a precarious situation on their hands with Russell, who’s a free agent after next season and reportedly being dangled in trade talks. Acquiring Murray gives the Timberwolves backcourt clarity.

Anthony Edwards and Karl-Anthony Towns are going to be the driving forces of head coach Chris Finch’s offense moving forward. Edwards finds success through being a physical scorer and Towns scores all over the floor. Murray would fill in the holes and theoretically take this operation to the next level.

The 25-year-old floor general attracts attention off the dribble. With Edwards and Towns in the fold, Murray will draw fewer double-teams and therefore be able to get more points in isolation. Murray gives the Timberwolves a reputable facilitator and defender, strong suits that Russell has struggled to attain.

All that said, the Timberwolves may prefer to stick with their core another season in an attempt to build on an encouraging 2021-22 campaign.

Related: New York Knicks among teams with interest in D’Angelo Russell: How a trade could look

The Knicks have a treasure trove of assets, which is accumulated to strike when a player of Murray’s caliber becomes available. In other words, Murray would be an impactful pickup for New York.

RJ Barrett has become a plausible two-way wing and Julius Randle is capable of being an electric scorer. The Knicks need another legitimate scoring option, which Murray provides; he’s an efficient jump shot away from being a top-20 player. Nonetheless, Murray’s well-rounded offensive arsenal gives the Knicks much-needed backcourt scoring and his defense fits in with their defensive-minded approach.

Murray is 25, meaning he and Barrett, 22, aren’t near their prime. That’s a prosperous pairing and would be accompanied by a handful of other respectable young players (e.g. Obi Toppin, Quentin Grimes and Jericho Sims).

New York can send the No. 11 and 42 picks in the 2022 NBA Draft, Quickley, Burks and their 2023 first-rounder to San Antonio for Murray. The Knicks fill a decade-long void for good while the Spurs get another lottery selection (they already select ninth), more draft capital on the whole and a compelling young guard in Quickley.

The factor that could stop the Knicks from acquiring Murray, though, is them feeling they won’t have enough shooting to complement the lifelong Spur and Barrett; the two players are volatile shooters.

1. Dejounte Murray to the Washington Wizards

Bradley Beal is a free agent, and the Wizards have been disappointing on a yearly basis of late. They need stability at point guard, and Murray would certainly do as such for head coach Wes Unseld Jr.’s rotation.

Sure, Beal and Murray have similar offensive tendencies in attacking the rim. On the other hand, they’d form one of the elite backcourts in the NBA from a sheer talent standpoint. Plus, the Wizards’ amplitude of shooters can stretch the floor for the pair of guards. 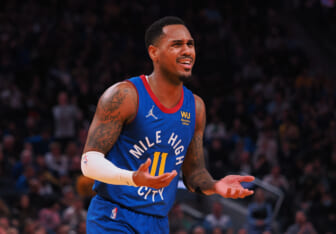 Kristaps Porzingis drains perimeter jump shots and can put the ball on the floor. Kyle Kuzma is a respectable shooter coming off an auspicious first season with the Wizards. Corey Kispert can shoot the lights out. One figures the Wizards can get a veteran sniper or two to come aboard in free agency after securing Beal and Murray.

Washington will have a handful of hefty contracts to give out after 2024, as Murray and Porzingis will each be free agents. But that’s a problem to worry about later. The Wizards need to get in Eastern Conference contention and having to pay said players top-flight money is a good problem to have.

Washington can send the No. 10 pick, Hachimura, Avdija, Caldwell-Pope and a future first-rounder to San Antonio for Murray. The Wizards make a splash while the Spurs get a pair of former lottery selections (Hachimura and Avdija), end up having back-to-back top-10 picks (they’d pick ninth and 10th) and could flip Caldwell-Pope for assets.