For San Antonio, this year’s iteration of the NBA Draft is going to be key for the team to retool and earn a playoff spot after a three-season hiatus.

There’s a lot of moving parts for the Spurs. Guard Dejounte Murray posted his first All-Star appearance this past season with a stellar all-around performance. San Antonio also has a few veterans who don’t necessarily fit into the team’s long-term future.

For the Spurs, it’s going to be all about figuring out a vision. That is to say, rebuilding for the future or attempting to retool with an aging Gregg Popovich still manning the bench. Before we preview the San Antonio Spurs draft, let’s check in on the picks they boast in the late-June event.

With this former No. 1 pick slated to hit restricted free agency, there’s rumors that the Spurs have interest in him. Ayton, 23, is likely set to receive max contract offers on the open market. For good reason. He’s proven to be among the most-talented young centers in the NBA and is going to be a franchise cornerstone for another team if the Phoenix Suns don’t re-sign the center.

If Phoenix’ brass decides someone like Ayton is not worth the max, the team will likely look to pull off a sign-and-trade. That’s where the Spurs and their combination of veteran players and draft picks could come into play.

In this hypothetical, San Antonio sends out the ninth pick as the centerpiece for Phoenix. It also adds the likes of Jakob Poeltl, Josh Richardson and Doug McDermott to make the salaries work.

From the Suns’ perspective, this gives them the ammunition to add another star-caliber player to team up with Devin Booker. It also provides them a starter-caliber center to replace Ayton.

Meanwhile, San Antonio finds that second star behind the aforementioned Murray to help expedite a rebuild. It must also be noted that this deal can’t be made until the start of free agency. This means San Antonio would be picking for Phoenix at nine.

Related: NBA Draft trades we could see in 2022

The Spurs’ roster isn’t necessarily balanced at this point. Even after trading Derrick White to the Boston Celtics back in February, there’s too many wings in the mix. That includes the likes of Lonnie Walker IV, Devin Vassell, Joshua Primo and Keldon Johnson. Simply put, San Antonio needs to use one of these assets to either find a starter-caliber four or more draft capital.

In this scenario, we suggest that the Spurs move off Johnson for multiple assets. Still only 22 years old, some figure he fits into San Antonio’s long-term future. However, Walker and Vassell both seem to boast more upside moving forward. If the Spurs can get a nice bounty for Johnson before he collects a big check following the 2022-23 season, it would make sense.

Perhaps, a contending team such as the Minnesota Timberwolves would come calling. Acquiring the 19th pick and a potential stud in that of power forward Jarred Vanderbilt would be seen as a coup for San Antonio. The Wolves would also likely have to throw in future draft capital to make this work from the Spurs’ perspective.

We’d love the team to use one of these selections on a G-League player such as Marjon Beauchamp or Jaden Hardy. That’s where you’re going to get the most bang for your buck.

Continuing with their international theme of the past, Serbia’s Nikola Jovic would also be a tremendous fit. At 6-foot-10 and with plus-level passing ability, he could morph into a star. From there, the Spurs go with someone like a former top-10 recruit in guard J.D. Davison from Alabama. While he did not live up to his billing as a freshman with the Crimson Tide, the talent is there. 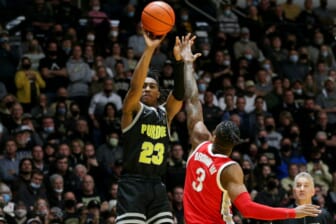