Auburn’s Jabari Smith is quite possibly the best prospect in the 2022 NBA Draft. The 6-foot-10 forward is a highly efficient outside shooter who can put the ball on the floor, sky above the rim and defend at a high level.

A lengthy forward who can shoot and be an athletic force on both ends of the floor screams “star potential.” Smith has the upside to be such a player. He’s a raw talent who led the way for one of the best teams in college basketball this past season.

Here are three ideal landing spots for Smith Thursday evening relative to where teams are selecting.

3. Jabari Smith to the Indiana Pacers

The Pacers went from aspiring to right the ship to embracing a rebuild, as they traded Domantas Sabonis and Caris LeVert during the regular season. While highly unlikely, Smith falling into the Pacers’ lap would help fast-track their rebuild.

Indiana has a handful of young players to be enthused by, including guards Tyrese Haliburton and Chris Duarte and big men Isaiah Jackson and Jalen Smith. Jabari Smith would be an optimum player to have in-between the Pacers’ budding youngsters.

While Haliburton and Duarte get points from the perimeter and Jackson/Jalen Smith get points in the paint, Jabari Smith can get his fair share from all over the floor. He’ll attack the rack off the dribble, stick pull-up jump shots and be a featured part of the team’s offense. Furthermore, Smith’s raw talent could eventually make him the centerpiece of head coach Rick Carlisle’s offense.

The problem? Indiana would have to trade up for Smith, as he’s highly unlikely to slip outside of the top three.

Jumping two spots in the NBA Draft Lottery, Oklahoma City is in prime position to get a franchise talent next to Shai Gilgeous-Alexander. Smith fits the bill.

The Thunder have a handful of young, frontcourt players who have had their moments like Darius Bazley and Aleksej Pokusevski. That said, their individual success has been hot and cold. The most auspicious part of Oklahoma City’s roster is its guard depth, which features Gilgeous-Alexander, Josh Giddey and Luguentz Dort. Smith could give head coach Mark Daigneault something he and the Thunder don’t have: an impact frontcourt player.

With Gilgeous-Alexander and Giddey serving as the primary ball-handlers and Dort serving as a wing scorer, Smith would begin his NBA career playing off the ball. He would get points running around the baseline while occasionally stretching the floor and gradually growing into a more prominent role in their offense.

The Thunder can draft Smith and then be highly active this offseason given their surplus of first-round draft selections over the next five years and roughly $30 million in cap space. Smith and the Thunder are a match. There’s just one team that makes a little more sense for his talents.

1. Jabari Smith to the Orlando Magic

The Magic won the NBA Draft Lottery and subsequently have their choice of their litter. Smith should be the pick.

One way or another, the Magic are going to be making a selection that partially hinders someone’s development, as they have several former lottery selections and young players in general. They might as well draft the best talent. Smith would add more flavor to a Magic core that includes Cole Anthony, Jalen Suggs, Franz Wagner and Wendell Carter Jr.

The No. 1 draft pick gives the Magic, who were 29th in the NBA in points this past season, much-needed scoring. Smith and Wagner/Jonathan Isaac would make for an enticing frontcourt scoring duo. Many of the aforementioned players have flaunted potential, but the Magic don’t have a concrete franchise player. Smith could be that linchpin, as he impacts the game on both ends, scores in varying ways and has a compelling frame.

His arrival provides more competition, allowing Orlando to trade a player who falls out of favor in the team’s rotation for a future draft pick. 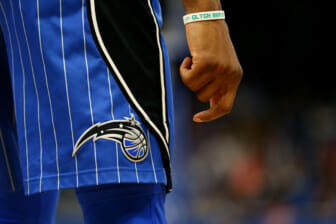