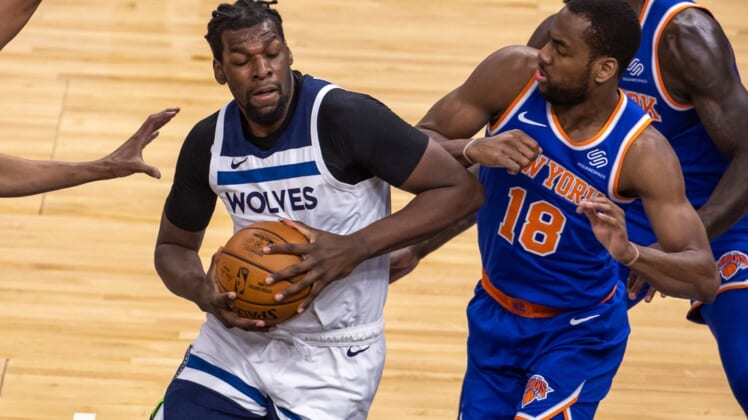 Beasley’s 3-pointer gave the Timberwolves their first lead since they led 10-9 in the first quarter and completed an evening filled with uphill climbs for the Timberwolves.

Minnesota cut an 18-point second-quarter deficit to one at the half but trailed by as many as 12 in the third and trailed by nine with 6:54 left before ending the game on a 17-7 run.

Anthony Edwards (nine points) and Karl-Anthony Towns (five points) scored the first 14 points in the Timberwolves’ run before Edwards kicked the ball out to a wide-open Beasley, who sank the go-ahead basket.

The teams traded turnovers before Reggie Bullock stole the ball from Towns following a miss by Julius Randle.

The Knicks called timeout with 5.1 seconds left but RJ Barrett, pressured by Towns, missed a fallaway jumper just before the buzzer sounded.

Edwards finished with 24 points and Towns finished with 18 points and 17 rebounds for the Timberwolves, who snapped a two-game losing streak and improved their record to 12-36, still the worst in the NBA. Beasley scored 20 points and Jaden McDaniels added 18 points.

Randle had 26 points and 12 rebounds for the Knicks, who have lost two straight following a three-game winning streak. Barrett scored 23 points, followed by Elfrid Payton (17), Alec Burks (13) and Bullock (10).

The Knicks took their 18-point lead by going on a 19-3 run spanning the first and second quarters. Randle scored the final two baskets of the first for New York, which scored six of the last seven points to take a 26-19 lead.

The teams traded baskets to open the second quarter before Barrett drained a 3-pointer and Burks scored eight straight points to put the Knicks up 39-21 with 8:11 left in the half.

The Timberwolves chipped away and finished the second on a 12-3 run in which Edwards and Ricky Rubio each scored five points before missing potential go-ahead 3-pointers in the final 35 seconds of the half.

Randle scored the final six points of the third quarter to give the Knicks an 81-70 lead.