Dallas Cowboys head coach Mike McCarthy is embarking on his third season in that role after posting a combined 18-15 record to open his career in Texas.

Following last season’s brutal loss to the San Francisco 49ers in the NFC Wild Card Playoffs, there was actually some talk that McCarthy wouldn’t return in 2022. Owner Jerry Jones threw that out the window almost immediately.

With that said, McCarthy could be entering a do-or-die campaign with the Cowboys. It’s championship or bust for this organization with the Philadelphia Eagles having closed the gap in the NFC East.

In touching on his job security ahead of the Cowboys opening training camp later this week, McCarthy seemed upset over rumors of his potential demise in Big D.

Honestly, we’re not sure what McCarthy is expecting. Dallas finished an ugly 6-10 in the former Green Bay Packers head coach’s first season with the team. It boasted a 12-5 record this past season, only to lay an egg at home against San Francisco in the first round of the playoffs.

He’s the Cowboys’ head coach. With that comes pressure. With that comes questions about job security for an organization that has not earned a trip to the conference championship game since current starting quarterback Dak Prescott was two years old. Let that sink in for a second.

Mike McCarthy is on the hot seat

Regardless of what McCarthy and Jones want to tell us publicly, the former is firmly on the hot seat heading into this season.

Dallas continues to be linked to recently-resigned former New Orleans Saints head coach Sean Payton. It’s not something that’s going to die down any time soon.

Jones does have a history of being loyal to his coaches. For many, he’s actually been too loyal. This includes the belief that he held on to Wade Phillips for too long before ultimately replacing him with Jason Garrett during the 2010 season.

Garrett himself might have worn out his welcome in Dallas before he was let go following the 2019 season in favor of McCarthy. It also seems that Jones is supportive of McCarthy running the ship moving forward. 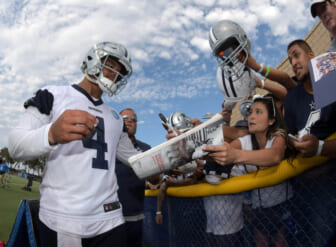 “The thing I want to clear is up is that the idea of Mike twisting in the wind wasn’t the case at all. There was never an issue with me with Mike being the head coach. You never heard that from me. I didn’t want to get involved publicly because they would have just made it more it more interesting for another club.”

As you can tell, McCarthy has had success. However, it must be noted that he enjoyed coaching all-time greats Brett Favre and Aaron Rodgers with the Packers.

More recently, playoff failure has been the name of the game for the 58-year-old head coach. He has not led a team to a playoff win since back in 2016. Overall, McCarthy-led teams are a mere 10-9 in the postseason. That must change in 2022 if he wants to keep his job in Big D. Period!