Jerry Jones: Mike McCarthy was not ‘twisting in the wind’ 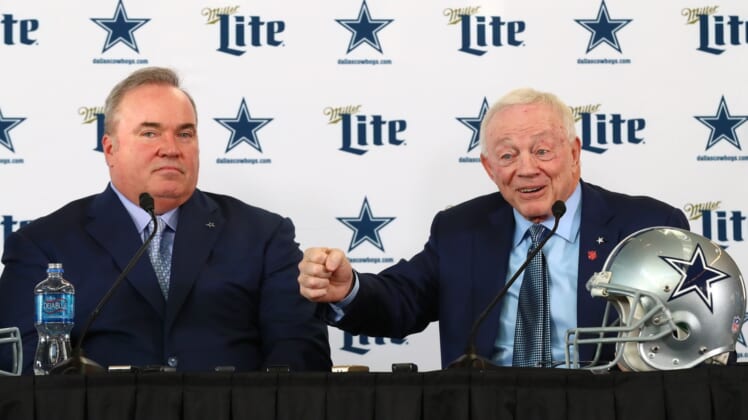 Jones said it was merely a strategy aimed at keeping defensive coordinator Dan Quinn from leaving for another NFL head coaching position.

“The thing I want to clear is up is that the idea of Mike twisting in the wind wasn’t the case at all,” Jones said in an interview on 105.3 The Fan in Dallas. “There was never an issue with me with Mike being the head coach. You never heard that from me. I didn’t want to get involved publicly because they would have just made it more it more interesting for another club.”

Jones’ stance Friday was in stark contrast to the one he presented last week. He acknowledged being “very, very frustrated” and said the “ultimate decision in these coaches is one that I have to make.”

Those comments came five days removed from Dallas’ 23-17 loss to the San Francisco 49ers in an NFL wild-card game. The Cowboys won the NFC East and were the No. 3 seed in the playoffs after finishing the regular season with a 12-5 record.

McCarthy replaced Jason Garrett before the 2020 season and has an 18-15 mark. He has three years remaining on his contract.

Jones also addressed the public’s interest in Sean Payton, who stepped down as the New Orleans Saints coach this week. Payton previously worked as an assistant with the Cowboys from 2003-05.

“I understand the speculation. Sean is an outstanding coach. But I haven’t talked to him and am not in any way part of his departure there in New Orleans,” Jones said. “He didn’t have any place in anything I’m doing regarding our staff.”