Dallas Cowboys might end up replacing Mike McCarthy after all

Once the Dallas Cowboys’ season came to a conclusion in a loss to the San Francisco 49ers in the NFC Wild Card Playoffs, rumors picked up that head coach Mike McCarthy could be out of a job after just two seasons.

the Cowboys’ brass made it clear following the disappointing loss that it planned to keep McCarthy for a third season.

That’s the end of the story, right?

Not so fast. Jones expanded on this during his weekly interview on 105.3 The Fan in Dallas recently. He did not seem too committed to the embattled McCarthy moving forward.

“I don’t want to wait until we’re sitting here with no season left to address these things we’re doing or not doing,” Jones said. “And so all of that is in the mix here and a part of what I do. But that’s the way I do, as you know, the ultimate decision on these coaches or anywhere around here is what do I have to make? And, so, the guy that you got to be — you don’t got to be — the toughest on should be the one in the mirror. He’s the one that has the ultimate responsibility and consequently I get to operate at that guy’s timeline and that guy’s display of information.”

That certainly doesn’t sound like someone who has made up his decision regarding McCarthy’s future in Big D. And in reality, the final decision has always been left up to Jones.

Will the Dallas Cowboys make a coaching change?

In particular, there’s been some quiet rumors regarding Moore potentially replacing McCarthy as the Cowboys’ head coach. It makes sense. McCarthy is an offensive-minded head coach who doesn’t call plays. That role is filled by the aforementioned Moore. 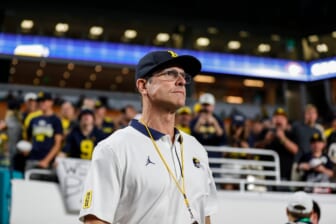 Does it make sense to keep a head coach as nothing more than a figurehead rather than replace him with someone who could lead the charge for the next decade-plus? Not really.

There’s also something to be said about upgrading at head coach with an external candidate. Much has been made about Jim Harbaugh’s flirtation with a return to the NFL. He’d be an obvious upgrade over McCarthy for the Dallas Cowboys. The same thing could be said about Sean Payton, who might be looking to change his career path.

One thing is clear. The status quo is not working in Dallas. The team went 12-5 during the regular season, only to lose to San Francisco at home in the NFC Wild Card Playoffs. Changes need to be the name of the game in Big D. It’s become clear that Jerry Jones agrees.