Jim Harbaugh is coming off his best season yet with the Michigan Wolverines, leading the program to a 12-2 record and a spot in the College Football Playoffs.

Less than a week after Michigan lost to Georgia in the Orange Bowl, we’re now hearing rumors that Harbaugh is flirting with a return to the NFL.

According to Bruce Feldman of The Athletic, sources close to the situation believe that Harbaugh is tempted to rejoin the professional ranks. “I think it’s real,” one source told the college football insider.

Given his previous success at the NFL level with the San Francisco 49ers, there wouldn’t be a shortage of teams interested in Harbaugh. Below, we look at five ideal landing spots for the 58-year-old head man.

It must be noted that Harbaugh has a solid relationship with Broncos all-time great and executive John Elway. These types of relationships can go a long way when considering a move of this ilk. And in reality, this might just be the shot in the arm a downtrodden Broncos organization needs with head coach Vic Fangio potentially out of a job.

There’s absolutely no reason why Denver’s brass should even consider retaining Fangio. This organization has not been relevant on the broader NFL stage since Peyton Manning’s retirement following the 2015 season. Adding Harbaugh to the mix would be absolutely huge.

There’s rumors circulating from the Twin Cities that Mike Zimmer could be out of a job after eight pedestrian seasons with the Vikings. Minnesota is coming off its second consecutive non-playoff campaign and seems to be stuck in mediocrity.

Alone, Harbaugh wouldn’t change this. However, his history of building great coaches staffs with Stanford, the 49ers and Michigan would act as an upgrade by itself. We’d also be highly intrigued to see how the respected head coach would use Dalvin Cook in the run game. While Harbaugh is a former NFL quarterback, his rushing attacks have proven to be dominant at nearly every stop — both in college and at the professional level.

Chicago Bears bring back the quarterback

As a player, Harbaugh started his NFL career under Mike Ditka with the Bears. He played in the Windy City from 1987-1993. That stint included consecutive double-digit winning seasons in 1990 and 1991 as Chicago’s starting quarterback.

It could be said that this is the last sustained success the Bears have had on the field. Outside of his relationship with the organization, Jim Harbaugh seems to be an ideal fit in Chicago. The hope here is that he’d be able to do wonders with young quarterback Justin Fields after the 2021 first-round pick had his ups and downs playing under soon-to-be-fired head coach Matt Nagy.

Imagine the dynamics that would be in play here. Dating back to their days as rivals in college and in the NFC West, Harbaugh and Pete Carroll have not had a great relationship. It started with an on-field spat between the two when the former was Stanford’s head coach and Carroll was leading the USC program. This was taken to a whole new level in the pros.

Right now, there’s no firm indications Carroll will move on from the Pacific Northwest. What we do know is that Russell Wilson is increasingly likely to demand a trade this off-season. A lot of that has to do with a deteriorating situation between the quarterback and head coach.

Why wouldn’t Seahawks general manager John Schneider kick the tires on this possibility? The idea would be to choose Wilson over Carroll. In doing so, the Hawks would objectively be getting an upgrade on the sideline. It almost makes too much sense. Besides, this would be Harbaugh’s way of taking it to the 49ers following their ugly divorce years ago. 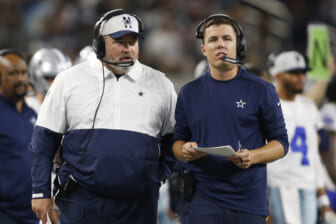 “The Raiders head coaching job might be tough for him to say no to given his ties to the organization — he started his coaching career there in 2003 — and the fact that there’s already a solid quarterback in place in Derek Carr. He’s also friends with Raiders owner Mark Davis,” Feldman noted in his aforementioned report.

Following the scandal and resignation of Jon Gruden, it would not be a shock if Vegas opted to go big-game hunting on the coaching market. Rich Bisaccia has done well in an interim role. But he’s not the long-term solution with these Raiders.

In hiring Harbaugh, Davis would be making a major statement to the Vegas’ fan base. Regardless of cost, he’s in it to win it. As for a fit, Jim Harbaugh working with Derek Carr or another veteran option next season would make a lot of sense. He’d be a dramatic upgrade in the desert. That’s for sure.