Michigan Wolverines head coach Jim Harbaugh could be headed back to the NFL. Despite criss-crossing the country in a full-court recruiting press, the former Super Bowl head coach has been linked to multiple openings in the pros.

That’s no more true than in Las Vegas with the Raiders likely looking for a new man to run the ship after earning a surprise playoff appearance this season.

On the very same day that interim head coach Rich Bisaccia interviewed with owner Mark Davis for the full-time job, we have some interesting news coming from the Michigan camp.

“Multiple sources inside Michigan football told The Athletic this week that they think if Harbaugh is offered the Raiders head coaching job, he’d take it,” Bruce Feldman of The Athletic reported Wednesday evening.

These sources did admit that Harbaugh can be “hard to read” while acknowledging that their “hunches could be wrong.”

Even then, this fits in tightly with other reports that there’s mutual interest between the former San Francisco 49ers head coach and the Raiders’ organization. Las Vegas’ decision to fire general manager Mike Mayock after three seasons will also play a role in this decision-making process.

Feldman’s report focuses on the fact that Harbaugh has never spent more than four seasons as a head coach in any of his stops prior to his current seven-year run with the Wolverines.

It also must be noted that Harbaugh was forced to take a pay cut on an extension last January after a sorely disappointing 2020 campaign with Michigan. Now that he’s coming off leading the program to the College Football Playoffs, the enigmatic former NFL quarterback is going to want a raise.

We reported earlier in the week that Harbaugh and the Wolverines were talking extension with the program having put in a competitive offer. Whether that’s enough to sway the head coach remains to be seen. 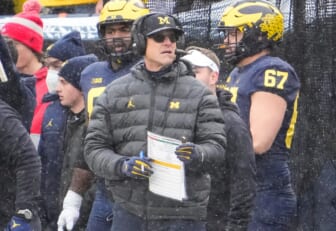 What we do know is that Vegas is seemingly going big-game hunting to find a full-time replacement for disgraced recently-departed head coach Jon Gruden. Given his brand name and success at both the college and professional levels, Harbaugh would fit that description.

Harbaugh’s four-year run with the San Francisco 49ers (2011-14) included him leading the organization to three consecutive NFC Championship Game appearances and a trip to the Super Bowl.

As for a potential link to the Raiders, he served as the team’s quarterbacks coach in 2002 and 2003 before getting his first job as a head coach with the University of San Diego back in 2004.

As of right now, the Raiders have been linked to only a few names. That includes Bisaccia and New England Patriots inside linebackers coach Jerod Mayo.

This isn’t surprising given the fact that Las Vegas is a mere few days removed from seeing its season come to an end in the AFC Wild Card Playoffs against the Cincinnati Bengals. Unlike other teams searching for a new head coach, Vegas is somewhat late to the party.

Could this also be an indication that Davis and Co. are zeroing in on a specific target like Jim Harbaugh? Those close to the situation believe that the Raiders might ultimately fill their general manager job before opting to hire a new head coach.

This, too, could play a role in the team’s decision-making process. That’s especially true if current Cleveland Browns VP of Football Operations Kwesi Adofo-Mensah ends up landing the job. He crossed paths with Harbaugh during a two-year span when both were members of the 49ers.

Stay tuned. This promises to get a lot more interesting in the days ahead. For now, it seems like Jim Harbaugh to the Raiders is a bet you should be willing to make.