Mike Conley is among several players on the Utah Jazz who could be on the move this offseason in the wake of the team’s disastrous spring. Utah lost to the Dallas Mavericks in round one of the Western Conference Playoffs, head coach Quin Snyder stepped down and Donovan Mitchell trade rumors are alive and well.

Conley, 34, brings a smooth skill set to the table. He’s a composed ball-handler, an efficient shooter and a respectable defender. Conley can effectively run an NBA offense.

The Pelicans willed their way to the playoffs this past season. Furthermore, they gave the Phoenix Suns a run for their money in round one. With a core to be enthused by, the Pelicans could pursue a floor general like Conley to set the table for head coach Willie Green’s offense.

Conley’s skill-set fits in any NBA offense. Brandon Ingram and CJ McCollum are high-level scorers. If he plays, Zion Williamson is a formidable interior scorer. Conley fills all the holes in their offensive establishment.

The veteran would find the aforementioned scorers in their hotspots. When someone is double-teamed, Conley can stick a perimeter jump shot. He’ll be a glue piece, as Conley can dabble in multiple aspects of the team’s offense.

New Orleans can move Graham, Nance and a second-round selection to attain Conley. For their sake, it’s a win-now move. As for the Jazz, they get a fast and capable point guard in Graham and an athletic forward in Nance.

All that said, the Pelicans may prefer to get Williamson back in the fold and go into next season with the talent already in the building. They can also use the No. 8 pick in the NBA Draft to upgrade their roster.

2. Mike Conley to the Minnesota Timberwolves

Karl-Anthony Towns has confirmed his status as one of the best big men in the NBA and Anthony Edwards is a 20-year-old star. Conley would be a savvy fit next to both players and in head coach Chris Finch’s system as a whole.

Russell had a brutal postseason and rumors have run amok that he could be moved. Conley fits the Timberwolves’ shot-happy offense. He can slow down the game in halfcourt sets and make their offense more effective.

Conley would assume a vital role, as he’d be replacing the team’s No. 3 scorer (Russell) and be in charge of facilitating for others. He also adds a much-needed defensive presence to their backcourt.

Minnesota can send Russell, who will be playing on an expiring contract, to Utah for Conley, a frontcourt shooter in Hernangomez and a future first-rounder. From Utah’s perspective, they get a lively scorer in Russell who provides a new face to pair with Mitchell in the backcourt.

The one factor that could stop Minnesota from acquiring Conley, though, is the team preferring to build on an overall encouraging season — one that Russell was a key part of. 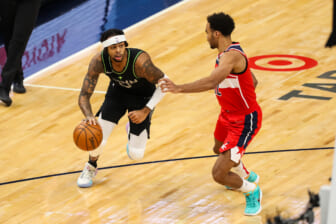 1. Mike Conley to the Washington Wizards

The Wizards have one of the more funky standings in the NBA. One way or another, they need a point guard, and Conley would be a plausible acquisition for their sake.

Bradley Beal is reportedly likely to re-sign with Washington after a season-ending wrist injury, which came around the time they acquired Kristaps Porzingis from the Dallas Mavericks. It also came six months after the Wizards traded Russell Westbrook to the Los Angeles Lakers for a package that included Kyle Kuzma. At full force — and with Conley in the mix — the Wizards can make hay in the Eastern Conference.

Beal is an elite scorer in attacking the basket. Porzingis is a highly productive scorer who can get points inside and outside. Kuzma and Rui Hachimura can create their own shot. Daniel Gafford is money in the paint. Washington also has the No. 10 pick in the draft.

Conley would get the ducks in a row for the Wizards. The point guard’s presence allows Beal to operate more off the ball and everyone else to play to their strengths. All the while, Conley can generate offense on his own and stretch the floor. He’s the stable ball-handler the Wizards need to take pressure off others.

Washington can send Utah Caldwell-Pope, a quality wing, and Avdija, a former lottery selection. This trades balances out Washington’s rotation and fills a void.