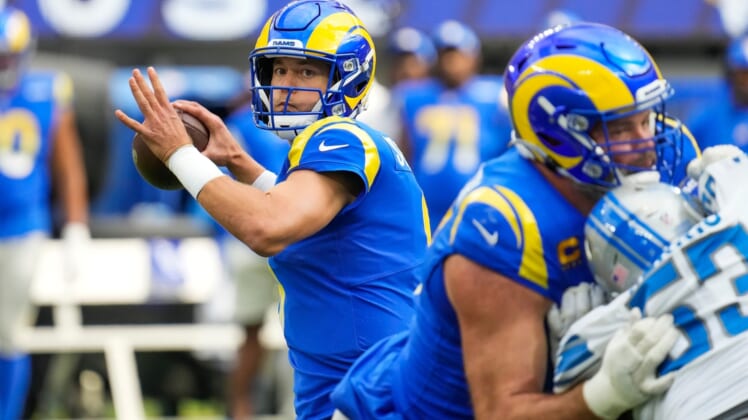 The visiting Detroit Lions battled but ultimately succumbed to a more complete team in the Los Angeles Rams, who won 28-19 on Sunday in Inglewood, Calif.

Looking for his first win, Detroit head coach Dan Campbell took some gambles that paid off, including two fake punts converted for first downs and a successful onside kick, giving the Lions a chance to win a game as heavy underdogs.

But playing against his old team, Jared Goff couldn’t get the job done. Goff finished 22-of-36 for 268 yards with a touchdown. However, looking for the go-ahead score late in the game, Goff threw an interception in the end zone to Jalen Ramsey before throwing another to safety Nick Scott to end the game.

Matthew Stafford, whom the Rams acquired from the Lions in a deal for Goff, completed 28 of 41 passes for 334 yards and three touchdowns against his former team. Stafford’s favorite target was Cooper Kupp, who finished with 10 catches for 156 yards and two scores.

Stafford threw his 300th career touchdown late in the second quarter on a 2-yard slant route to Kupp, becoming the seventh-fastest QB to reach 300 passing TDs.

The Lions (0-7) took control of the game early. Goff connected with running back D’Andre Swift on a screen pass and Swift took it 63 yards for a 7-0 lead. Swift finished with 144 yards from scrimmage.

Detroit kicker Austin Seibert executed an onside kick to perfection on the following possession, with Lions defensive back Tracy Walker recovering on the Lions’ 45-yard line. Ten plays later, the Lions converted a 37-yard Seibert field goal for a 10-0 advantage.

Punter Jack Fox converted a fake punt on a 17-yard pass to Bobby Price on fourth down to keep the drive alive.

The Rams (6-1) finally got on the scoreboard on the ensuing possession, using a 10-play, 67-yard drive that finished with a Matt Gay 33-yard field goal. The Lions responded with another field goal, this one from 47 yards, to lead 13-3.

Los Angeles took the lead on back-to-back touchdowns passes by Stafford: an 11-yard fade route to Van Jefferson and a 2-yarder to Kupp for a 17-13 lead.

After a big fourth down stop by the defense, the Lions retook the lead 19-17 on Seibert’s fourth field goal with 1:43 left in the third quarter.

Los Angeles grabbed the lead back for good on Kupp’s second touchdown catch, this one on a 3-yard out route. Robert Woods got in the end zone for the 2-point conversion and the Rams took a 25-19 lead with 14:04 left to play.

Gay added a 47-yard field goal for the final tally.