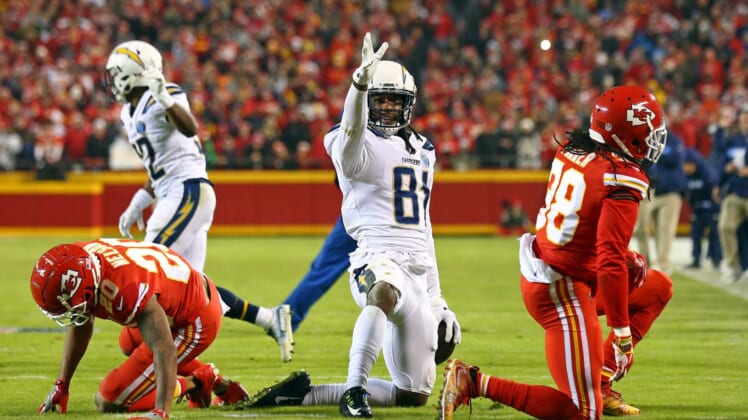 We have not heard a lot about the Los Angeles Chargers since they finished up shop on a disappointing seven-win 2020 NFL season and ultimately replaced Anthony Lynn with Brandon Staley as head coach.

Los Angeles is banking on Staley’s resume as an offensive mind to get the most out of rising second-year quarterback Justin Herbert following a tremendous rookie season.

However, Herbert’s sophomore campaign might not include a fellow former first round pick in wide receiver Mike Williams. Let us explain.

“We’re going to keep all options open,” general manager Tom Telesco said Thursday about Williams, via Fernando Ramirez of SI.com. “I think he’s a really, really high-level football player. The opportunities that he gets, he makes big plays for us.”

Indeed, Williams has played at a high level when he’s been healthy. He recorded 49 receptions for 1,001 yards while leading the NFL by averaging 20.4 yards per catch back in 2019. Williams, 26, fell back down to earth this past season — registering 48 receptions for 756 yards.

The larger issue for the Los Angeles Chargers is Williams’ $15.68 million cap hit for the 2021 season after the team picked up the fifth-year option on the receiver’s rookie deal.

Said cap hit would represent the ninth-highest figure among NFL receivers in 2021, behind teammate Keenan Allen. That’s a whole heck of a lot to pay out to one position with holes on both sides of the field.

The Los Angeles Chargers currently find themselves a cool $32.67 million under the estimated 2021 NFL salary cap. With that said, they also have stud tight end Hunter Henry set to hit free agency after placing the franchise tag on him last season.

Los Angeles also wants to upgrade on both sides of the ball following a sorely disappointing 2020 season. Williams could very well be the odd-man out.

Telesco didn’t necessarily mention the possibility of trading the former No. 7 overall pick. But by saying all options are on the table, he made it clear that a move of that ilk could be in the cards. At the very least, Williams is not returning to the Chargers with the above-mentioned cap hit.

Boasting a clear No. 1 receiver in Allen, the Chargers have no real need to pay Williams that huge hit in 2021. However, a contract extension could also be in the cards here.

This is all complicated by the fact that the NFL free agent class at wide receiver is absolutely loaded. Hypothetically, the Chargers could acquire a player with similar production as Williams at a much lower cost.

If Los Angeles were to move off the Clemson product, it’s safe to assume that a second-round pick would be the ceiling in any trade. Of course, that’s dependent on Williams agreeing to lower his cap number for any team looking to acquire him.

The Miami Dolphins, New York Jets and New England Patriots are three AFC East squads in need of wide receiver help. Meanwhile, it would not be a huge surprise to see the Indianapolis Colts put in a call. They need receiver help for the recently-acquired Carson Wentz and could lose T.Y. Hilton in free agency.

Click below for more Los Angeles Chargers news and rumors.