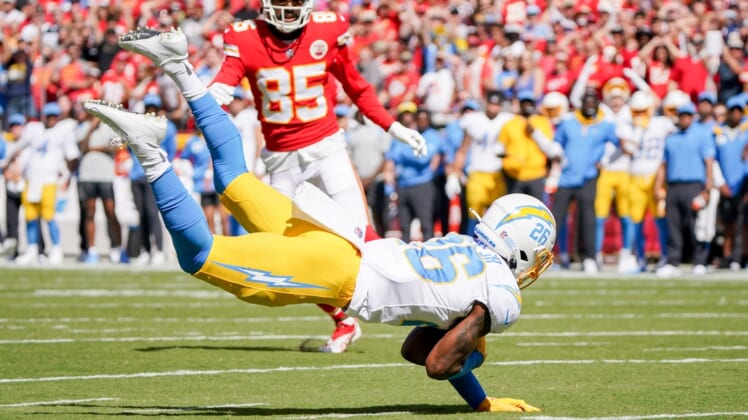 Justin Herbert drove Los Angeles to a touchdown with 32 seconds remaining as the Chargers upset the Kansas City Chiefs 30-24 in a wild AFC West division matchup at Kansas City, Mo.

An interception by Alohi Gillman enabled the Chargers to take possession at their 41 with 1:42 remaining. The pick was the second Los Angeles swiped from Patrick Mahomes, who suffered just his third defeat in 19 starts against AFC West opponents.

A false start took Los Angeles out of field goal range, but the Chiefs were called for pass interference on a fourth-down pass before the second of two strikes to Mike Williams resulted in a 4-yard touchdown for the decisive score. Tristan Vizcaino missed the PAT.

Herbert passed for 281 yards, going 26 of 38 with four touchdowns as the Chargers (2-1) dropped the two-time defending AFC champions into last place in the West division by capitalizing on four takeaways. Three of those ended the Chiefs’ first three possessions.

Mahomes went 27 of 44 for 260 yards with three touchdowns and two interceptions. He could not rally the Chiefs (1-2) as their final possession ended on the Los Angeles 49. Mahomes’ last three attempts fell incomplete, including a Hail Mary to end the game.

Los Angeles forced turnovers on each of the Chiefs’ first three possessions and led 14-3 at halftime.

Two takeaways came off strips by Tevaughn Campbell and subsequent recoveries by Michael Davis. Asante Samuel Jr. also snagged his second interception in as many weeks after a pass by Mahomes bounded off the hands of target Marcus Kemp.

The Chargers converted the last two takeaways into touchdown drives covering 53 and 51 yards. Herbert hit Keenan Allen and Austin Ekeler with touchdown throws of 4 and 16 yards, respectively, to give Los Angeles a 14-0 lead. Herbert had a string of 10 consecutive completions at one point and finished 15 of 18 for the half.

The Chiefs finally scored with 19 seconds left before the half, though they had to settle for a 34-yard field goal by Harrison Butker after reaching the Los Angeles 17 before stalling.