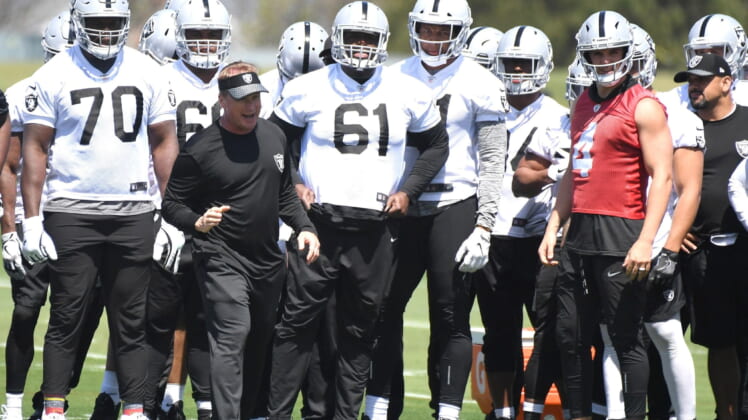 It appears that head coach Jon Gruden and the Las Vegas Raiders are looking to completely remake their offensive line in front of quarterback Derek Carr.

Las Vegas already moved off starters Trent Brown, Gabe Jackson and Richie Incognito earlier this offseason with the latter two being released outright. Three-time Pro Bowler Rodney Hudson now joins that trio in being jettisoned from Vegas. However, the situation seems to be a tad different.

According to multiple media reports, Hudson actually requested his release from the Raiders. In the process, one of the game’s best centers forfeited his $3.5 million guaranteed cash for the 2021 season.

As of right now, only starting left tackle Kolton Miller remains from the group that has helped protect Carr over the past few seasons. It is pretty surprising in that Carr has been among the most-protected quarterbacks in the NFL over the past two seasons — going down a combined 55 times during that span.

For comparison’s sake, Russell Wilson of the Seattle Seahawks was sacked 47 times last season alone. It’s one of the biggest issues he’s had with Seattle as things spiral out of control between the Super Bowl-winning quarterback and his organization.

With Rodney Hudson now on his way out of town, the Raiders have a big hole at center. According to Pro Football Focus, the former Florida State star has yielded a total of three sacks since the start of the 2015 season. Simply put, Las Vegas is not going to find someone to duplicate that success either in free agency or via the 2021 NFL Draft next month.

By making the move now rather than designating Hudson a post-June 1 cut, it costs the Raiders $1.9 million in room against the 2021 NFL salary cap.

It’s rather clear that this was to appease the longtime center. Even then, it does nothing to further the Raiders’ progress as it relates to upgrading a mediocre roster. They are now an estimated $25.75 million under the cap after the first wave of free agency with numerous holes to fill on the offensive line.

This has to be seen as the biggest takeaway from the Raiders’ release of Rodney Hudson. With most top-end NFL free agents along the offensive line off the market, sans Trent Williams, Jon Gruden and Co. will hit this unit hard when it comes to the 2021 NFL Draft.

Las Vegas is slated to pick 17th overall in the first round next month. It’s a decent position for the team to land a Week 1 starter. Former USC Trojans interior lineman Alijah Vera-Tucker could be an option to replace Jackson or Incognito at guard.

If the Raiders are looking for a Trent Brown replacement after trading the former Pro Bowler to the New England Patriots, Jalen Mayfield from Michigan and former Oklahoma State star Teven Jenkins could also be options. However, this will not solve the issues at center. Las Vegas must now find another avenue to find a starter-caliber player at that all-important position.