Richie Incognito getting released by Las Vegas Raiders, seeks to play in 2021 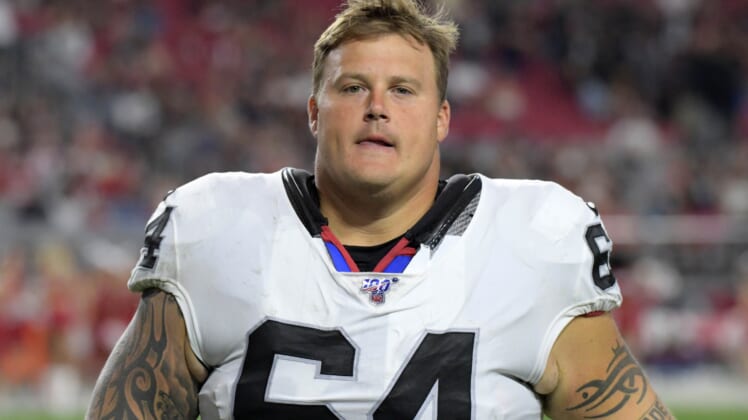 Four-time Pro Bowl offensive guard Richie Incognito will be released by the Las Vegas Raiders in a cost-cutting move.

The 37-year-old veteran appeared in only two games this past season for Las Vegas, but could still return to the team in 2021 at a discounted rate.

NFL Network’s Ian Rapoport reported on Incognito getting cut loose by the Raiders, and also added what the latter’s plans are moving forward:

According to Over the Cap, releasing Incognito will save the Raiders $5.475 million.

It was rather surprising that Las Vegas general manager Mike Mayock and head coach Jon Gruden signed off on bringing Incognito to the team in the first place. Despite a checkered off-field past and a reputation as a dirty player, Incognito was actually not a detrimental distraction to the Raiders once he joined the club in 2019.

In fact, it was the bizarre antics of All-Pro wide receiver Antonio Brown that made all the headlines at Raiders training camp two seasons ago, eventually leading to his release.

Based on his inability to stay healthy of late, it’s fair to wonder if Incognito can actually play this coming season, much less at a starting-caliber level.

Since there’s an implied interest from Rapoport’s report that Las Vegas might welcome Incognito back at a slightly lower price, that bodes well for his chances to sign with the Raiders or with another team if he so chooses.

If Incognito’s past volatility and unbecoming conduct had followed him to Las Vegas, there’s no chance Mayock or Gruden would want him back.

The way Friday’s news was framed suggests Incognito could have a better market than expected, at least in terms of teams who are willing to give him a chance to compete for a starting job in training camp.

At this point in his career, Incognito must understand that another big payday isn’t awaiting him. The lower NFL salary cap also won’t allow him to cash in on a rich, short-term offer.

Incognito has proven himself to be an elite player at his position at various points through the years. He’s never really had a chance at winning the Super Bowl, so unless he envisions that as a possibility with the Raiders, there’s a good chance he could sign with a championship contender on a one-year contract.

With the opportunity to sign anywhere as a free agent, any team in need of interior offensive line help could do worse than Incognito — again, provided he can avoid serious injury and isn’t the toxic presence he’s been in NFL locker rooms in the past.

The Los Angeles Chargers jump to mind as a team that could take a big step forward next season in quarterback Justin Herbert‘s sophomore campaign. In order to maximize Herbert’s chances for success, though, he could stand to have better protection, as the Bolts’ offensive line ranked dead-last in Pro Football Focus’ final grades.

Incognito may not spurn the Raiders for an AFC West rival like the Chargers, so perhaps he’d take on a mentor role with a younger team in need such as the Cincinnati Bengals, Miami Dolphins or New York Jets.

More likely than not, though, Incognito will either seek his best opportunity to hoist the Lombardi Trophy, or remain in Las Vegas since the franchise took a chance on him when no one else would after he sat out the entire 2018 season.