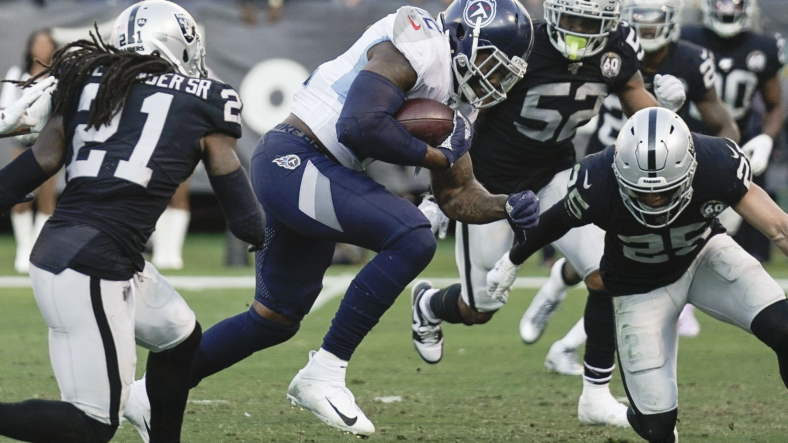 Regardless of whom you blame for the Las Vegas Raiders’ biggest blown lead in franchise history, they face a concerning reality. Since 1990, only 11.3 percent of 0-2 teams have advanced to the playoffs. Of course, with an additional seventh seed, we’ll likely see more teams overcome an early fall in the standings.

Nevertheless, the Raiders will have an early-season gut check as they prepare for the Tennessee Titans this week. If they drop to 0-3, they would have to go on a run similar to the 2018 Houston Texans, who lost their first three games then won nine consecutive outings and finished 11-5.

But before we look at what the Raiders must do to knock off the Titans, let’s go back to how they squandered a 20-0 lead and lost 29-23 in overtime to the Arizona Cardinals.

First and foremost, the defense will continue to falter against mobile quarterbacks who can run with the football if no one other than edge-rusher Maxx Crosby pressures the pocket.

Vegas signed Chandler Jones to a three-year, $51 million deal ($32 million in guarantees), and he hasn’t come close to playing up to that salary, logging five tackles, one for loss, and two pressures. The front office inked Bilal Nichols to a two-year, $11 million contract that includes about $7.1 million in guarantees; he has just four tackles. By the way, the team listed rookies Neil Farrell Jr. and Matthew Butler as healthy scratches on Sunday.

As more mobile quarterbacks enter the league, three of them currently within the AFC West, the Raiders must adjust their defense in conjunction with the evolution of the quarterback position. Cardinals signal-caller Kyler Murray is a one-of-kind scrambler on the move, but if other passers can extend plays on foot, Patrick Graham’s unit may give up more back-breaking plays this season.

If the Raiders don’t plan to sign Ndamukong Suh, they need more from the defensive linemen they paid or drafted this past offseason.

Before Murray ran all over the yard at Allegiant Stadium, head coach Josh McDaniels didn’t seem to know how to handle a commanding lead.

The Silver and Black had an awful fourth-quarter drive in which Derek Carr threw the ball on three consecutive plays (all incomplete) with a 23-7 lead. Running back Josh Jacobs, who ran relatively well in the first half, should’ve taken a handoff at least once in that sequence. He logged seven of his 19 carries in the second half—zero in overtime.

While we can understand the lack of commitment to the ground attack in a double-digit deficit in Week 1, McDaniels unjustifiably faded Jacobs with a strong early lead on Sunday. He didn’t have to get ultra-conservative, though the Raiders could’ve bled the clock in the final quarter, which is a frustrating reality when you realize the Cardinals scored their final touchdown in regulation with zero seconds left on the clock.

Related: One year after leading Las Vegas Raiders to playoffs, Derek Carr says team needs to learn how to win

On top of that, the Raiders settled for two field goals in the Cardinals’ red zone during the second and third quarters.

Is that you, Jon Gruden?

Some of the issues that plagued this team under Gruden hurt the Raiders Sunday, which is a recipe for disaster against a team that continues to battle for 60-plus minutes.

Lastly, between McDaniels and Carr, someone may have tried to overcorrect the heavy reliance on wideout Davante Adams in Week 1.

While Carr did a good job of ball distribution, and the Cardinals did their best to neutralize Adams, the play-caller and quarterback must find a way to get the star wideout involved to stop a late-game collapse.

General manager Dave Ziegler acquired Adams and signed him to a five-year, $140 million extension for those crucial moments. Oddly enough, Carr only targeted him three times in the second half—two of those in overtime.

In the postgame press conference, McDaniels said the team has to start winning as they learn lessons, which hits the nail on the head. After two weeks of mistakes, missed opportunities, and miscalculations, his team faces early adversity. The Raiders’ response will either show they’re not quite ready to compete for a top spot in the AFC standings or their resolve under a new coaching staff.