Larry Fitzgerald: ‘No timetable’ on retirement decision, will wait for head coach hire 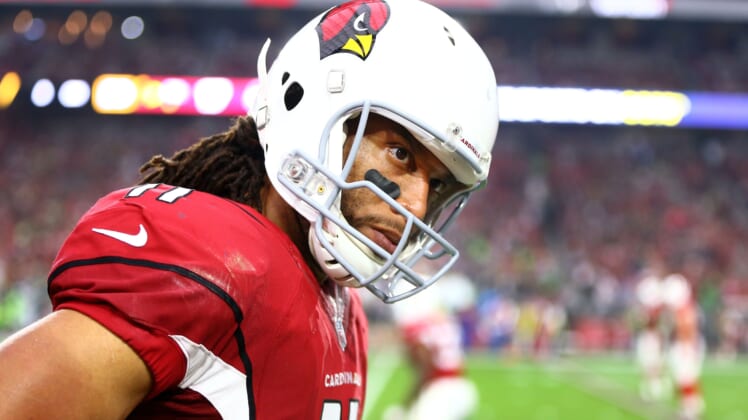 Arizona Cardinals wide receiver Larry Fitzgerald, who will turn 35 this August, only seems to get better with age. Though, after a down season for the Cardinals, Fitzgerald remains undecided about continuing to play versus retiring.

Fitzgerald also said he’s going to wait to see who the team’s next head coach will be before making a decision.

“I don’t have a head coach right now so there’s a lot going on,” Fitzgerald said in an interview with the Golf Channel. “I’m going to take some time to figure it out. Our owner and president Michael Bidwill and General Manager Steve Keim are out right now interviewing head coaches. I’m interested to see what’s going to happen. I’ll make a decision shortly after I would imagine.”

Fitzgerald is one of the league’s ageless wonders and certainly has not lost his step. If healthy, Fitzgerald could certainly make another go of it in 2018. After all, he ranked second in the league with 109 receptions in 2017. He finished off the year with a total of 1,156 yards and six touchdowns.

Fitzgerald was also the glue that helped keep the Cardinals from completely falling apart last year.

It sure would be awesome for Fitzgerald to eventually retire as a Super Bowl champion. Though Fitzgerald’s Cardinals are going to have to pick up the pace quite a bit from their middling 8-8 finish in the NFC West.

If Fitzgerald does return, he will be playing with a team that just saw both quarterback Carson Palmer and head coach Bruce Arians retire. The All-Pro receiver is currently signed through the 2018 season with Arizona.