Kyrie Irving is on track to return to the Brooklyn Nets' lineup for Saturday's contest against the Orlando Magic. Can he coexist with new teammate James Harden? 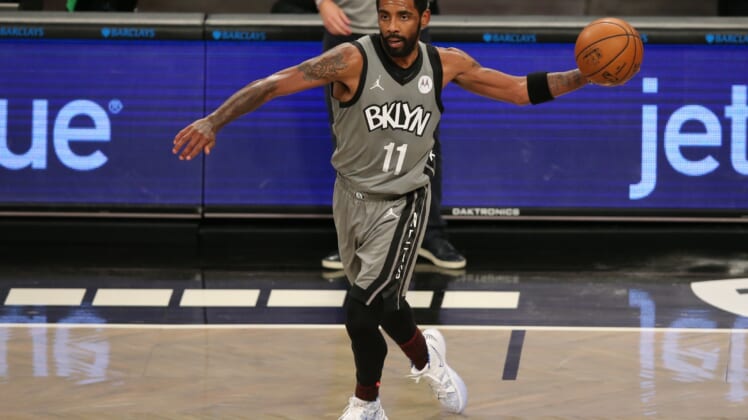 The Brooklyn Nets are expected to get Kyrie Irving back in the starting lineup in the aftermath of their blockbuster trade for James Harden.

Irving has been away from the team for personal reasons, but appears on track to be back in action after his latest episode of bizarre behavior and dubious leadership.

ESPN insider Adrian Wojnarowski had the scoop on Irving’s status, but The Athletic’s Shams Charania also reported on the money Irving cost himself by going AWOL:

Irving must continue to test negative and adhere to NBA protocols in order to be eligible for Saturday’s contest against Orlando.

It’s fair to wonder whether Harden’s arrival, which cost the Nets tons of future assets, might ultimately spell the end for Irving in Brooklyn. Before that’s decided, though, you can bet the Nets want to see Harden, Irving and Kevin Durant all on the court at the same time under first-year coach Steve Nash’s direction. That opportunity appears to be on the horizon very soon.

Will Kyrie Irving finally settle in with Brooklyn Nets?

The world-class talent of the 28-year-old superstar has never been in doubt, but Irving is really struggling to establish himself as the serious leader of a franchise. Whether it be his contentious relationship with the media, refusal to buy in to a team concept or simply going off the grid, Irving is behaving like a full-blown knucklehead.

Think about it this way: Irving wanted to leave the Cleveland Cavaliers after hitting a game-winning shot in the NBA Finals because he wanted to win a title on his own terms. He abruptly wore out his welcome with the Boston Celtics, and was expecting to be part of a 1-2 punch in Brooklyn with Durant.

Now that Harden is on the Nets, Nash has three gigantic egos and mercurial personalities to juggle. That might wind up being too much, especially if Irving acts out again or leaves the team.

Plus, Harden and Durant began their NBA careers together as teammates in Oklahoma City, so Irving may eventually feel as alienated from his superstar teammates as he seems to be from just about anyone else in the NBA realm.

At least for now, though, the hope is there for Irving, Durant and Harden to coexist. If they can figure it out, there’s no question this is one of the most talented offensive trios the game has ever seen. Durant may be the most versatile scorer of all-time, Irving is among the best ball-handlers and craftiest finishers at the rim ever, and Harden’s analytics-driven offensive game has changed the NBA.

The Milwaukee Bucks should definitely be on edge about Harden’s arrival, as they try to win a championship with Giannis Antetokounmpo for the first time. That said, Brooklyn’s fate is directly tied to the chemistry between its superstars — and again, whether or not Irving fully buys in.