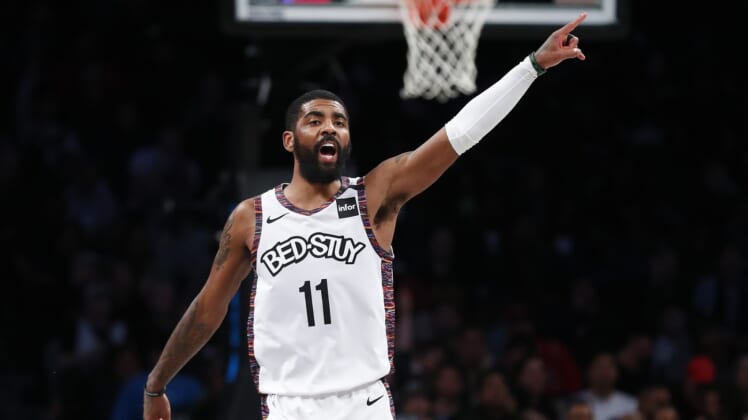 Now that the team has acquired James Harden, Brooklyn Nets rumors will shift from that trade to the status of NBA champion Kyrie Irving. As you likely already know, Irving has been absent from the Nets for the past three games due to “personal reasons.”

The exact nature of Irving’s absence is not yet known. What we do know is that it continues a drama-filled brief marriage between the enigmatic point guard and his organization.

Now that Brooklyn has added that second star to team up with Kevin Durant, some reports indicate that the team has gained leverage as it relates to the Irving situation.

Impact of Nets trading for James Harden on Kyrie Irving

“I think Kyrie is going to have to explain what’s transpired here in the last week,” ESPN’s Adrian Wojnarowski reported recently. “Ultimately, teams have to be able to count on you. If there’s issues, if there are things they need to help Kyrie Irving work through, like any organization with a great player, they are going to be there to do that.”

That’s the biggest backdrop to the Harden trade. Brooklyn can easily contend for a conference title with Kevin Durant and James Harden leading the way. Irving is an added benefit, someone that the Nets clearly can’t rely on moving forward. That was the case during his first season with the Nets. And now, there’s multiple more layers added to the situation.

“I’m not going to shy away from it: Without a doubt the organization is disappointed with not having any one of our players, in this particular case, Kyrie, not amongst us — not in the trenches with us and so forth,” general manager Sean Marks told reporters, via The Athletic.

That statement is unlikely to sit well for a player in Irving who made news earlier this season by refusing to meet with the media. By Marks making it public that he is disappointed in the star guard, a further rift could be created. With that said, it’s hard to blame the respected executive.

All of this comes with an inexperienced head coach in Steve Nash attempting to lead the ship in Brooklyn. Irving was apparently upset that he wasn’t consulted in the hiring of Nash, who had a built-in relationship with Kevin Durant stemming from their days together with the Golden State Warriors.

It’s in this that other reports suggest that the relationship between Irving and Durant has cooled off a bit in recent weeks. Talk about major drama.

At this point, everything seems to be on the table. Brooklyn could gauge interest in Irving’s services on the trade block, though, there’s highly unlikely to be much interest in him.

The hope for a suddenly contending Nets team is that this drama passes. Kyrie Irving returns. A big three is formed. And a deep run in the playoffs is the end result. Whether that’s a pie-in-the-sky hope remains to be seen.

We’re certainly going to be hearing a whole lot more about this in the coming days and weeks should Irving’s absence continue. It’s an interesting backdrop with Harden likely set to make his Brooklyn debut here soon.