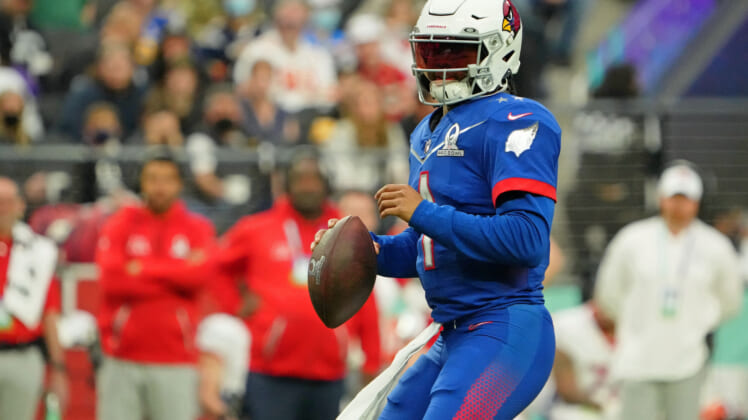 It’s been a strange offseason for Kyler Murray and the Arizona Cardinals. Fans witnessed the 2019 No. 1 overall pick have a miserable display in their Wild Card loss to the eventual Super Bowl champions, which is to say, maybe their effort and in turn Murray’s wasn’t as bad as we thought. No one else could take down the Los Angeles Rams either.

Since then, we’ve seen Murray strip references to the Cardinals off his social media, and the team matched his attitude with a similar peculiarity.

The perceived issue has been Murray being eligible for a contract extension, likely wanting something close to top dollar, with the team not being willing to meet his asking price, whatever that may be. As Murray enters the second-to-last year of his rookie contract, it appears he wants to be paid. Now.

In what should be a surprise to no one, the Cardinals’ starting quarterback has zero intention of showing up to voluntary workouts, which begin today. For his part, Murray and his camp suggest they’re not afraid to demand a trade, if it comes to it. Meanwhile, the Cards continue to maintain their stance that a trade is not on the table, citing they’d like Murray to remain the franchise quarterback for years to come. So the stalemate continues.

Related: Kyler Murray trade to the Philadelphia Eagles: How it might look

While this offseason for the Cards has been odd, it didn’t have to be.

Murray helped lead the Cardinals to their first playoff appearance since landing the No. 1 overall pick, which they used to select the QB out of Oklahoma, pairing him with Kliff Kingsbury in what was supposed to be an electric offensive attack. They’ve had two top-10 efforts in yards per game, and ranked 11th in points scored, but there’s been nothing to suggest Murray is among the very best in the game.

Perhaps that’s led to general manager Steve Keim being hesitant to offer Murray top dollar, or maybe they have other concerns, about his attitude within the locker room and how it relates to the rest of their roster.

Whatever the issues are, the Cardinals would be wise to do whatever it takes to keep K1 happy. He is their franchise. Teams go out of their way to try and get a player who has the potential of Murray and would quickly line up, throwing first-round picks and change for a chance to acquire the two-time Pro Bowl QB. I’m sure paying him the contract he seeks wouldn’t be much of an issue for them either as they happily pencil him in atop their depth chart.

Imagine if Murray were a free agent, would the Cardinals balk at his asking price, if they were a team desperate for a better quarterback under center? While there’s been some tension and the future is uncertain, the Cardinals would be much better off with a Pro Bowl quarterback than without one altogether, and they know this.