In a wide-ranging report weeks after Brooklyn’s loss to the Boston Celtics, Kristian Winfield of the NY Daily News noted that Durant had not spoken to the Nets’ brass. The very same report opined that things could end up spiraling out of control depending on the Kyrie Irving situation in Brooklyn.

The Nets are distancing themselves from Irving after he created a ton of drama this past season due to his stance against the COVID-19 vaccine. With Irving boasting a player option for the 2022-23 campaign, there’s an off-chance he doesn’t return to the Nets. At the very least, general manager Sean Marks and Co. don’t seem inclined to offer Irving a long-term contract should he opt out and hit free agency.

The backdrop here is the real possibility that Kevin Durant could force his way from Brooklyn after two marginal seasons for the organization. If so, one Western Conference team is the betting favorite to land Durant.

Bovada still has it at -5000 odds KD returns to the Nets. If that doesn’t happen, Phoenix is minor favorites to land him. The team is joined by the Dallas Mavericks and two teams set to take part in the NBA Finals later this week.

The Suns connection doesn’t come out of left field. Booker and Durant were teammates for Team USA in the 2020 Summer Olympics. Durant has also spoken well of the young Suns guard.

After boasting the best record in the Association during the regular season, Phoenix was taken out by the Dallas Mavericks in the Western Conference Semifinals. It was a bitter end to an otherwise brilliant season for Booker and Co.

It also raised questions about veteran point guard Chris Paul and his ability to be a No. 2 guy on a contending team at this stage in his career.

In addition to this huge contract and salaries having to come close to matching, Brooklyn simply isn’t giving Durant away for nothing.

Looking at a potential deal to the Suns, Chris Paul would have to head to Brooklyn to make the salaries work. From there, the Nets would likely demand Mikal Bridges and draft picks to make this worth their while.

The Mavericks are also an interesting potential landing spot in that it became apparent Luka Doncic needs more help during their Western Conference Finals loss to Durant’s former Warriors team. KD would be that perfect second star to team up with Luka as he’s still playing at an elite clip.

Any deal sending Durant to Big D would include the contracts of Tim Hardaway and Spencer Dinwiddie heading to Brooklyn. It’s highly unlikely this would be enough for the Nets to pull the trigger unless Durant makes it perfectly clear he’s done in the Big Apple. 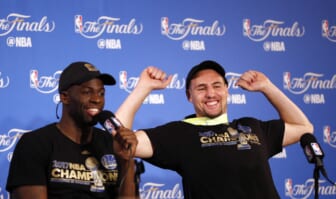 As for the Celtics, they don’t have the financial capability to acquire Durant without moving off star guard Jaylen Brown. We’re just not seeing that as a realistic option.

Golden State’s inclusion is interesting given Durant’s drama-filled departure from the team following the 2019 NBA Finals. Again, he’s involved in a war of words with Warriors forward Draymond Green.

The Warriors are also paying a record luxury tax with the need to sign star guard Jordan Poole to a massive extension after the 2022 NBA Finals. Despite their ownership group being willing to spend a lot of money, adding Durant to the mix for Andrew Wiggins, Jonathan Kuminga and picks wouldn’t make sense. That doesn’t even include the lack of a real fit for Durant in San Francisco.

Either way, this could end up being a story that blows up during the summer. In an NBA that sees stars wield a ton of power, Kevin Durant could force his way from Brooklyn. If so, it’s going to be a popcorn-worthy time around the Association this summer.