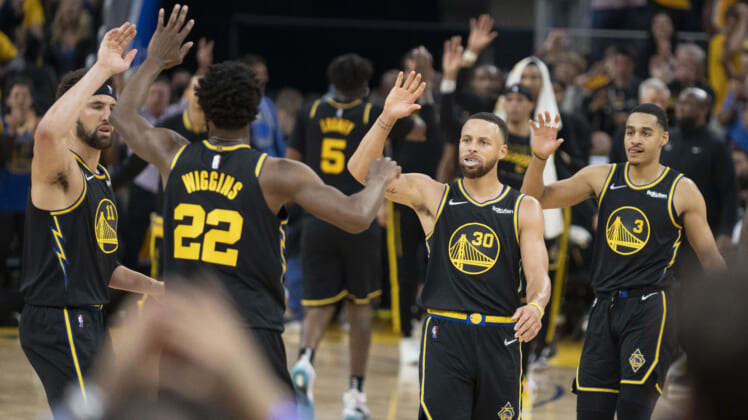 In their last chance to keep their season rolling, the Dallas Mavericks ultimately came up short, losing 120-110 to the Golden State Warriors in Game 5.

It wraps up a series that was never close, but like any competition there were some participants who ended up as bigger winners and losers than others. Let’s break them down.

Some may be sick of hearing it by now, but the Golden State Warriors are advancing to their sixth NBA Finals in the past eight seasons. It’s an incredible run.

But, there was a time when the Warriors were far from dominant, like from 1994 to 2006 when they didn’t make the postseason once.

Drafting Stephen Curry, one of the best ballers of our generation, tends to change things. If there’s one thing to admire about the Warriors, it’s that they were built from within. Curry, Klay Thompson, and Draymond Green were all drafted by the franchise, it’s not like they bought or built a superteam by being the Lakers or Nets. Like their team, Warriors fans are winning, in a big way.

Loser: All Mavs not named Doncic, Brunson or Dinwiddie

There were only three Mavericks who came to play on Thursday night. Luka Doncic was a given, and maybe Jalen Brunson was too, but Spencer Dinwiddie’s scoring outburst came too little, too late. The rest of the Mavs’ roster should be on notice as there’s no guarantee they return next season.

It wasn’t just Game 5, Doncic received very little support from his teammates throughout this series against the Warriors. The overall depth of the Mavs compared to the Warriors wasn’t even close and that became obvious over the course of the series.

Perhaps it’s a relief that we don’t have to see Doncic struggle anymore as the Warriors shoot circles around the Mavs.

Related: Why the Dallas Mavericks should not re-sign Jalen Brunson this offseason

Is there any better way to clinch a ticket to the NBA Finals? The Warriors made this series win a breeze, but in Game 5, they won with conviction.

Like we’ve seen in previous games this series, nearly every player who took the floor for Dub City played extremely well when the game was still in the balance. For the most part, Steve Kerr stuck to a seven-man rotation, with Moses Moody seeing 10 minutes as well. Every other player who took the floor (aside from Juan Toscano-Anderson’s 0 minutes played) saw at least 20 minutes.

They all flourished. Every starter scored in double figures, Jordan Poole did his thing, adding 16 points off the bench, and Nemanja Bjelica did a little bit of everything contributing to the win. It truly was a team effort, and if they keep this up in the Finals, Curry’s gonna have a fourth NBA Finals ring on his hand.

Can we get Luka Doncic some help already? The Mavericks superstar was clearly gassed from doing it all, playing in a total of 70 games this season, counting the playoffs.

There was even a point in the second quarter with four minutes remaining where TNT announcer Stan Van Gundy chastised Doncic for not hustling back in transition after getting his shot blocked. Doncic just threw his hands up and stayed on his end of the floor as Nemanja Bjelica made his way into the paint on the opposite end for the Warriors.

This definitely was not the Doncic who believed he could still win the series.

While it was certainly a strong year for the Mavs in head coach Jason Kidd’s first season at the helm, now improving over the offseason becomes the primary focus.

At the end of the day, Doncic needs more help and this playoff series made that more obvious than ever.