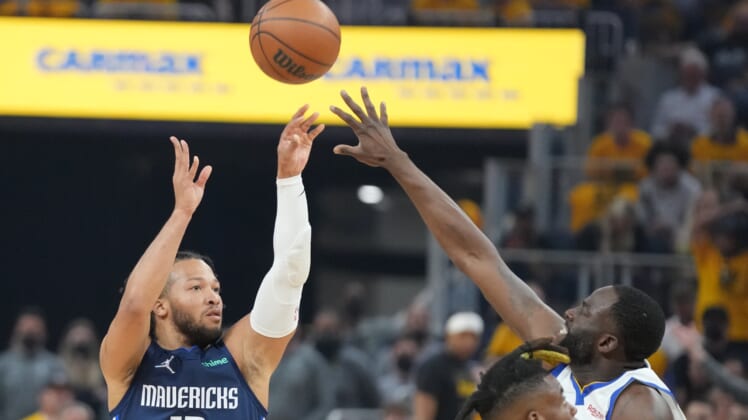 Few players have put themselves on the map like Jalen Brunson has for the Dallas Mavericks during their playoff run. When their superstar Luka Doncic went down with injury, missing three games in their First Round playoff series, it was Brunson who put the team on his back, averaging over 20 points per game to help the Mavs advance to the next round.

With Brunson set to hit unrestricted free agency this offseason, the Mavericks will be forced with a major decision as several other teams line up to sign the 25-year-old point guard.

Few would argue against the idea of Brunson being one of the top two or three players on the team, but is he worth paying an annual amount that could reach $20 million per season?

In my opinion, he’s not worth it. Not for a team built around Doncic.

Here’s why the Mavericks would be wise to let Brunson test free agency, and hopefully complete a sign-and-trade instead of letting him walk for nothing.

Jalen Brunson, Luka Doncic are not an ideal fit

The biggest argument against committing to a backcourt featuring Luka Doncic and Jalen Brunson is their defensive fit next to one another.

Doncic is far from a strong defender, and the same goes for Brunson. Like Doncic, Brunson’s defensive prowess also leaves much to be desired, but his undersized frame doesn’t help.

Yet one would be foolish to take the ball out of either of their hands.

If the Mavs want a scoring guard next to Doncic, they already have two viable options with Spencer Dinwiddie and Tim Hardaway. Sure, both could be on the move this offseason, and Brunson is certainly the younger of the trio, but Brunson may be able to bring back better value in trade.

Having Brunson around to take more of the offensive load off Doncic is nice, but the Mavs can find similar production for a fraction of the cost, possibly even doing so at another position that doesn’t also limit them defensively.

Brunson’s defensive limitations aren’t going to disappear, the guy’s not going to grow, and despite him still not reaching his peak offensively, he’s unlikely to ever become a sniper who can help space the floor.

The Mavs need to add two-way players next to Doncic, not a backcourt full of scorers.

Another big argument against retaining Brunson is the cost.

Recent projections have suggested Brunson could be looking at a contract that earns him somewhere between $20-$25 million per season.

That’s simply too much for a one-dimensional player with size limitations.

Not to mention, signing Brunson to a high-dollar extension puts the Mavericks deep into the luxury tax for the foreseeable future, essentially locking them into the core of their roster.

The Mavs can bring in another ball-handler to work while Doncic rests, but he doesn’t have to cost them $20 million per season.

Brunson sign-and-trade may be best

It’s understandable that the Mavs don’t want to let one of their top players leave for nothing.

Luckily another option is on the table.

We know Brunson is sure to generate interest on the open market. The Mavs can take advantage of this by trying to complete a sign-and-trade, sending Brunson elsewhere while taking on either draft compensation or rotational players.

The Mavs don’t have any cap space to replace him if they let Brunson leave as an unrestricted free agent, this is why conducting a sign-and-trade is so important.

There’s no telling just what they could bring back with a sign-and-trade, but with several other tradeable assets, it’s possible they can separate from Brunson while still returning with a much stronger roster as a whole without restricting their future spending ability.