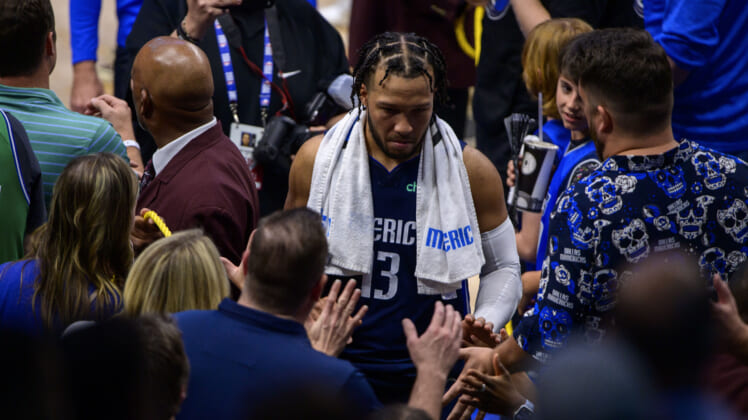 The Dallas Mavericks made one of the best decisions in the 2018 NBA Draft when they selected Jalen Brunson out of Villanova with the 33rd pick. Little did they know, the 6-foot-1 guard would go on to become a key contributor, even as a rookie, starting 38 games while playing 21.8 minutes per game.

Three years later, after Brunson has blossomed into a full-time starter providing a scoring jolt from the backcourt, he’s set to become an unrestricted free agent at the age of 25.

After his best season yet, there figures to be no shortage of interest in the floor general as he hits the open market. Here are five ideal Jalen Brunson landing spots in free agency this summer.

Staying in place with the Mavericks

Sometimes the best place to be is where you already are. For Brunson that could ring true with the Dallas Mavericks. He’s already earned a starting gig, playing next to Luka Doncic, and has experienced a mild amount of playoff success. With a team built around Doncic, who has yet to even reach his peak, there’s no reason to jump ship now.

Brunson already has a strong place in coach Jason Kidd’s rotation, is he really ready to mess that up in pursuit of a bigger paycheck? It depends on what Brunson’s priorities are. We should find out soon enough.

Related: Jalen Brunson expected to be re-signed by Dallas Mavericks in free agency

One team that could intrigue Brunson while offering similar hope for the future is the Detroit Pistons. Signing in Motor City would place Brunson next to Cade Cunningham, who, like Doncic, is a freakishly tall primary ball-handler at 6-foot-6. Joining Cunningham could work well for Brunson, who’s considered to be on the smaller side for a lead guard.

The Pistons are set to have the second-most cap space in basketball and have been linked to Brunson already via Jake Fischer of Bleacher Report. Suddenly trio of Cunningham, Brunson and Saddiq Bey doesn’t look so bad heading into the start of the 2022 season. All are 25 or younger, with the potential to be much better than the versions we saw a year ago.

Another team with connections to Brunson already is the Indiana Pacers, and with his former coach Rick Carlisle now leading the charge, there could be mutual interest. Carlisle was the Mavs coach when Brunson was drafted, and as mentioned, he quickly earned floor time even as a rookie second-round pick.

As we’ve seen with other players throughout the league, there could be a certain level of respect Brunson still holds for his first NBA coach. Look at Derrick Rose and his loyalty to coach Tom Thibodeau, having played for him in three different organizations.

With the Pacers rumored to be considering trading Malcolm Brogdon, it’s possible Carlisle would prefer to have “his guy” in the backcourt next to Tyrese Haliburton, which could prompt a big free agency offer to Brunson. As they say, money talks and the Pacers have a few ways to create a lot of space.

The New York Knicks are forever in search of a starting point guard. It’s like they’re legitimately cursed at the position or something. One potential solution may be to throw some money at the problem, by wooing Brunson to the Big Apple.

If Thibs sticks around, he’d love Brunson. For one, he used to employ his dad on his staff with the Minnesota Timberwolves. Secondly, Brunson is a tough, aggressive bulldog who isn’t afraid to drive the lane, much like D-Rose. While he may never be on the level of the former MVP, it’s not ridiculous to think Brunson can average 20-plus points per game in an increased role, which the Knicks would be able to offer.

The Knicks need shooting, but more importantly, they need a shot creator who can also distribute when the time is right. Brunson can come in and help elevate the offense and the atmosphere shouldn’t be too big for the New Jersey native.

The Brooklyn Nets are the one team on this list with no cap space. But, there’s no guarantee Kyrie Irving or Ben Simmons stick around. The Mavs may seek another star to pair with Doncic and while that’s unlikely to be Irving, maybe Simmons would intrigue them, adding another defender and skilled distributor to the flow.

If the Nets were to trade one of their stars, they’d be able to complete a sign-and-trade, bringing Brunson to Brooklyn. It likely wouldn’t make sense unless Irving denies his player option, or is traded elsewhere but crazier things have happened and Brunson may prefer playing closer to home.