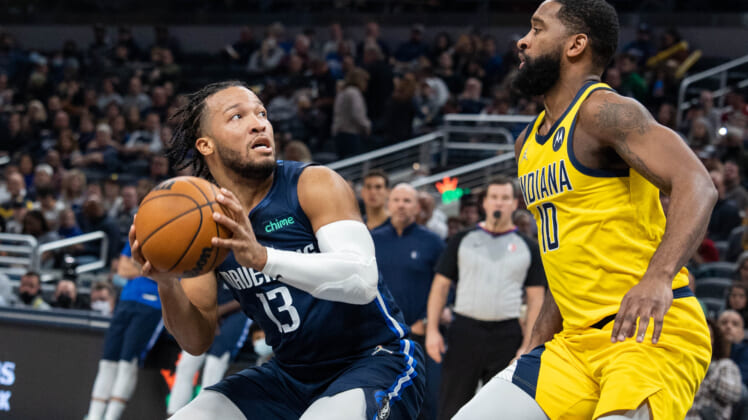 Coming off what might be considered the best performance of his basketball career, Dallas Mavericks point guard Jalen Brunson has put himself on the map. Sure everyone knew he had starting potential, but seeing Brunson put the Mavs on his back during Luka Doncic’s absence, taking down MVP Nikola Jokic and the rest of the Denver Nuggets was a sight to see.

The 41 points scored, with six three-pointers made, to go along with eight rebounds, five assists and two steals Brunson racked up are all indicators of what the scrappy guard from Villanova can do, only he did it in the biggest game of his young career. In the final year of his rookie contract, Brunson is set for unrestricted free agency, where the 25-year-old lefty is sure to land an eight-figure salary.

There will be no shortage of suitors for the rising star, but those with cap space are most likely to have a chance at doling out the payday Brunson deserves. For one, the Indiana Pacers are said to have an interest and with just over $23 million available to spend, they could be a major player in NBA free agency this offseason.

This is what Marc Stein recently alluded to in a podcast, noting the Pacers might be intrigued with the idea of adding Brunson to their core.

I recently reported that Indiana I’ve started to hear them as a team that might try to get into that mix with Rick Carlisle obviously knowing Jalen Brunson is game very well.

Related: Russell Westbrook trade to the Indiana Pacers: How it might look

Could Rick Carlisle give Pacers an in with Jalen Brunson?

On the surface, the Pacers don’t appear to have a strong need for another starting point guard. Isn’t that why they traded their All-Star? Sending Domantas Sabonis to the Sacramento Kings for Tyrese Haliburton?

Since the trade, Haliburton has seen his assist numbers soar from 7.4 per game to 9.6 with the Pacers. He appears to be a strong fit as a distributor (38.9% assist rate), whereas Brunson’s numbers set him up more as a complementary piece, as far as distribution goes (24.3% assist rate).

Still, it’s possible that the Pacers having Rick Carlisle as their head coach, who was with the Mavericks for Brunson’s first three seasons of his NBA career could re-align the two in Indiana. Brunson’s been on a steady, upward climb since coming into the league as the 33rd pick in 2018, but his biggest jump has actually come with Jason Kidd running the show in Dallas, not Carlisle.

Not to mention, do the Pacers really want to have all their investments tied up in the backcourt? It’s a decision they’ll have to make this offseason as they decide whether Malcolm Brogdon and Buddy Hield are long-term fits. It could be that the front office would rather shed the salaries of the two veterans while using that money toward Brunson.

With cap space to spend, a lottery selection that currently has them with the fifth-best odds, chances are the Pacers we saw toward the end of the 2021-22 season will look much different by the tipoff of the 2022-23 season.