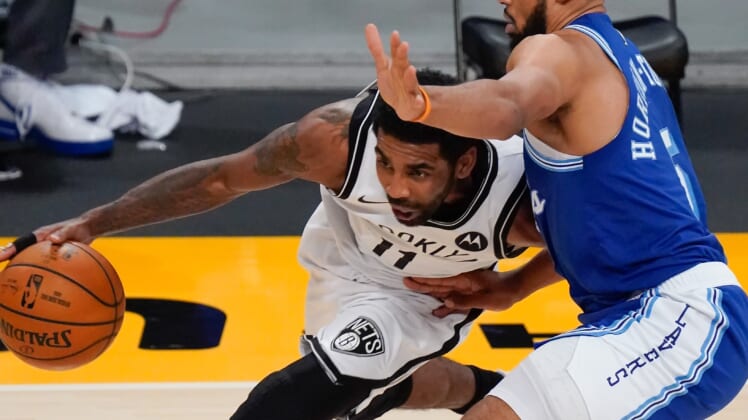 There’s now a decent chance that the Brooklyn Nets will have to pull off a Kyrie Irving trade this summer.

Following the Nets’ ugly first-round sweep at the hands of the Boston Celtics, there’s a ton of drama brewing in Brooklyn. That includes general manager Sean Marks calling Irving out after all of the COVID-related drama during the 2021-22 campaign.

It remains to be seen if Irving will pick up his $36.5 million option for the 2022-23 season. Either way, we woudn’t be surprised if either he requested a trade or the Nets opted to move him.

Below, we look at four ideal Kyrie Irving trade scenarios should he be put on the block during the summer.

The Mavericks are still vying for a championship this season and boast a stud young point guard in Jalen Brunson who has stepped up big time heading into free agency. While it’s being reported that the Mavs would love to retain Brunson in free agency, we wouldn’t put it past owner Marck Cuban from pulling off that eye-opening trade.

From an on-court perspective, teaming Irving up with Luka Doncic would give Dallas one of the best tandems in the entire NBA. The two would complement one another a great deal with what they do on offense.

As for the Nets, they add a still-young 25-year-old Brunson who stepped into a No. 2 role behind Doncic this past regular season. He averaged 16.3 points, 3.9 rebounds and 4.8 assists on 50% shooting. Even if Ben Simmons does return, Brunson would be a great addition to go with Durant.

Reggie Bullock also provides Brooklyn with a bench option in the frontcourt while the Nets acquire another first-round pick to go with the two they got from the Philadelphia 76ers in the Harden-Simmons blockbuster.

Los Angeles’ decision to deal expiring contracts for Norman Powell at the NBA trade deadline gives the team more flexibility to find another star to go with Paul George and Kawhi Leonard. Following an injury-plagued 2021-22 season, that very well could be what general manager Lawrence Frank opts to do.

Having a point guard of Irving’s ilk would make Los Angeles a legit NBA title contender, forming the next “super team.” The Clippers have struggled at point guard since Chris Paul exited following the 2016-17 season. This is a major need. Teaming Irving up with his former Cavaliers head coach, Tyronn Lue, would also be ideal.

From Brooklyn’s perspective, the team adds a three-and-D wing who has averaged 18.7 points on 41% shooting from distance since the start of the 2020-21 season. It also brings in a grizzled veteran in Marcus Morris and a still-young 25-year-old guard in Mann who has displayed flashes in his three-year career.

New Orleans’ playoff run this past season surprised the masses given Zion Williamson’s injury and how they started the campaign. Brandon Ingram and the recently-acquired C.J. McCollum looked like a dynamic duo. Assuming Williamson returns healthy, the Pelicans would have a great trio. Why not use the assets that general manager David Griffin has built up to acquire another star such as Irving?

A core group of Ingram, McCollum, Williamson and Irving would certainly have championship aspirations in New Orleans.

The cost wouldn’t be too much for the Pelicans. However, it would create a more well-rounded roster in Brooklyn. In particular, Valanciunas would be a great fit with Durant and Simmons. The underrated veteran center averaged 17.8 points, 11.4 rebounds and 2.6 assists on 54% shooting a season ago. Nance Jr. provides solid defensive ability in the frontcourt and Graham is a decent starting point guard in today’s NBA. He could also be flipped with draft picks for another borderline star.

Irving has in the past talked about how he and LeBron James have mended fences. Whether that’s true remains to be seen. What we do know is that the Lakers have to blow this up behind King James and Anthony Davis if they are going to compete for a title after a 49-loss season.

Acquiring Irving for the bloated contract of Westbrook as well as two youngsters and a first-round pick would be an absolute coup. The idea would be take advantage of Irving’s situation with the Nets.

As for the Hornets, they have been linked to Westbrook over the past several months. Apparently, they view him as a nice fit next to LaMelo Ball. If Charlotte is to pull off a move of this ilk, it would have to give up a stud starting guard in Rozier while ridding itself of Hayward’s contract. The reward comes in the form of sharp-shooting guard Seth Curry and two first-round picks.

Both Rozier and Hayward would come in handy for Brooklyn. In particular, we love the Rozier fit next to Durant and Simmons. We’re talking about a dude who is averaging 19.3 points, 4.4 rebounds and 4.3 assists on 39% shooting from distance over the past three seasons. That’s a nice get in a Kyrie Irving trade.