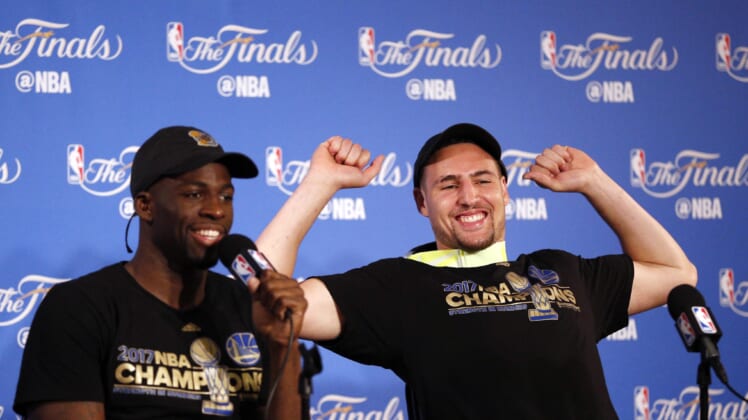 There’s going to be a lot of talk about individual performances and team stats heading into the 2022 NBA Finals between the Boston Celtics and Golden State Warriors.

One team has been absolutely dominant at home during the playoffs. The other team has performed extremely well on the road. How might this impact the championship matchup?

From an historical perspective, Golden State will head into its sixth NBA Finals in eight years. It joins some amazing teams on that short list. And from an individual perspective, Celtics star Marcus Smart has been doing some crazy things.

Below, we look at six crazy stats heading into Game 1 of the 2022 NBA Finals in San Francisco Thursday evening.

Marcus Smart as a major difference-maker for the Boston Celtics

Statistically, Smart has not been great during the Celtics’ playoff run. He’s shooting 40% from the field, including a 33% mark from three-point range. The longest-tenured Celtics player is also turning the ball over 2.2 times per game.

None of that matters. The reigning NBA Defensive Player of the Year continues to prove himself as one of the biggest difference-makers heading into the Finals. In the 15 Eastern Conference Playoff games that Smart suited up in, the Celtics were plus-55. In Game 7 of the conference finals, Miami Heat players shot a combined 3-of-18 from the field when guarded by Smart. That’s going to loom large going up against Stephen Curry and Co.

There’s a reason Warriors head coach Steve Kerr opted to mirror Luka Doncic with Wiggins and his excellent defense in the Western Conference Finals. When Doncic went to the bench, Wiggins followed. Once Doncic returned, the Warriors’ three-and-D wing followed him back on the court.

With Wiggins guarding the opposing team’s best player throughout the Western Conference Playoffs, his impact was felt on the defensive end of the court. Consider this. Golden State found itself plus-111 in the minutes Wiggins was on the court through 16 games heading into the NBA Finals. This is also going to be key with Wiggins going up against the likes of Jayson Tatum and Jaylen Brown starting Thursday evening.

Boston Celtics splits when Jayson Tatum has it going

We saw Tatum drop a playoff career-high 46 points in a Game 6 win over the Milwaukee Bucks in the Eastern Conference Semifinals. It was yet another brilliant performance from the forward in an elimination game.

As Boston’s best player, it shouldn’t come as too much of a surprise that the team is dominant when he’s able to drop 30-plus points. Tatum hit that mark 29 times in the regular season. Boston boasted a 24-5 record in those 29 games. It was 27-26 when Tatum did not reach that plateau.

Thus far this postseason, Tatum has recorded 30 points or more five times. Boston is 4-1 in those games. The moral of this story? Golden State should give him the Luka Doncic treatment. That is to say, making sure he’s not efficient with the scoring he does do. If not, this could be a long series for the Warriors’ defense.

Related: Bold predictions for Game 1 of the 2022 NBA Finals

NBA Finals history will be made Thursday

When things tip-off from Chase Center Thursday evening for Game 1 of the NBA Finals, history will be made. Golden State’s core group has a combined 123 games of NBA Finals experience. The Celtics? Zero. Nill. None. This represents the largest disparity in experience in the history of the championship round. It really is insane to look at.

A season that started with Boston boasting a 25-25 record through 50 games, concluded with the Eastern Conference champions winning 26 of its final 32 regular season games. During that 32-game span, Boston gave up less than 100 points 13 times (41%). In the playoffs, Boston has yielded less than 100 points in six of 18 games (33%).

Led by DPOY Marcus Smart, each member of the Celtics’ starting five received a vote for Defensive Player of the Year. Jayson Tatum, Robert Williams, Al Horford, Marcus Smart and Jaylen Brown all boasted defensive win shares of 3.4 or better. To put this into perspective, only two members of the Warriors (Andrew Wiggins and Stephen Curry) reached that plateau.

After an injury-plagued two-year hiatus, the Warriors are back in the NBA Finals for the sixth time in eight years. In the process, Steve Kerr’s squad has joined some absolutely elite company. Only three dynasties in NBA history can claim to have done the same in the past.

We’re only talking about some of the greatest players and teams in NBA history. Bill Russell and his Celtics, Magic Johnson and the Showtime Lakers and Michael Jordan’s Bulls. This is a pretty amazing accomplishment for the big three in San Francisco.