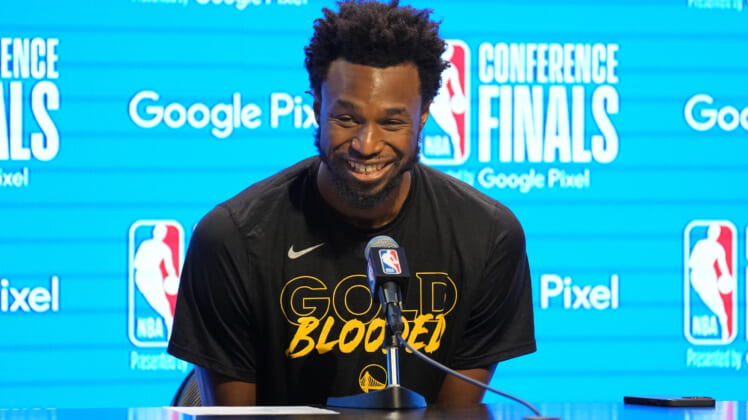 It’s funny how 25 months can change the narrative. Former No. 1 pick Andrew Wiggins knows this all too well.

His Golden State Warriors team was absolutely blasted when the dealt D’Angelo Russell to the Minnesota Timberwolves for Wiggins, a 2021 first-round pick (stud young forward Jonathan Kuminga) and change back in February of 2020.

During his five-plus seasons with the Wolves, Wiggins was nothing more than an enigmatic presence for the organization. He never morphed into that superstar the team expected after dealing Kevin Love to the Cleveland Cavaliers for him before the former Kansas star even played an NBA game.

Fast forward several years, and Wiggins is now a key component for a Warriors team that looks very much like the NBA title favorite following a blowout Game 1 win over the Dallas Mavericks in the Western Conference Finals.

Wiggins’ stats in Game 1 don’t tell us the entire story. He was darn good from that perspective, scoring 19 points and grabbing five rebounds on 8-of-17 shooting.

Rather, Thompson is talking about Wiggins’ absolutely brilliant defense on a player in Luka Doncic who was dominating opposing teams throughout the playoffs leading up to the Western Conference Finals.

With Wiggins as the primary defender throughout the series opener, Doncic shot a disastrous 6-of-18 from the field while turning the ball over seven times. He was a whopping minus-30 in 35 minutes of action. For his part, the star guard also threw praise in Wiggins’ direction after the game.

So it goes. The narrative surrounding Andrew Wiggins has flipped on its head since his days with the Timberwolves. He’s no longer that embattled figure who never lived up to expectations.

Including the Warriors being plus-28 in Wiggins’ 35 minutes Wednesday evening, the team has just been on a whole other level when he’s been on the court in the postseason.

It doesn’t take a basketball savant to realize that Wiggins’ two-way ability is one of the primary reasons the Warriors are now seven wins from earning the NBA title.

His ability to shut down the opposing team’s best offensive player has turned Wiggins into one of the best perimeter defenders in the game. It’s also not like he isn’t excelling on offense with a team that boasts high-scoring guards such as Stephen Curry, Klay Thompson and Jordan Poole.

Unlike his Timberwolves days, Wiggins isn’t being asked to be the No. 1 or No. 2 scoring option. He teams up with the likes of Thompson and Poole in acting as the Warriors’ second option behind Curry depending on the game.

But the scoring does indeed help. The Warriors are 0-2 in the playoffs when Wiggins fails to hit double digits. They are 9-1 in the 10 games he’s reached that plateau.

Andrew Wiggins and the fit with Klay Thompson, Jordan Poole

That’s been the primary backstory in San Francisco. The Warriors continue to push Wiggins to be more aggressive. He had no issue with that before Jordan Poole took his game to a new level and Klay Thompson returned from his two-plus year absence back in early January.

Once Klay returned, Wiggins found himself in an awkward position. He knew all about the Splash Brothers even before joining the Warriors. How was he going to fit in? Could he continue to be aggressive knowing that the Dubs had two of the best shooters in NBA history?

It took a while for Wiggins to get acclimated once Thompson returned to action. But the chemistry took off after a few games.

Said chemistry has come out big time during the Warriors’ playoff run. Wiggins is no longer in that no man’s land he existed in with the Timberwolves. And while the first-time All-Star will never be the true superstar most envisioned when he entered the NBA in 2014, the Warriors don’t need that.

It’s in this that a questionable trade just over two years ago has turned into a perfect fit for Andrew Wiggins and the Golden State Warriors. And if they hoist the Larry O’Brien next month, all the naysayers will be served a delicious feast of crow.