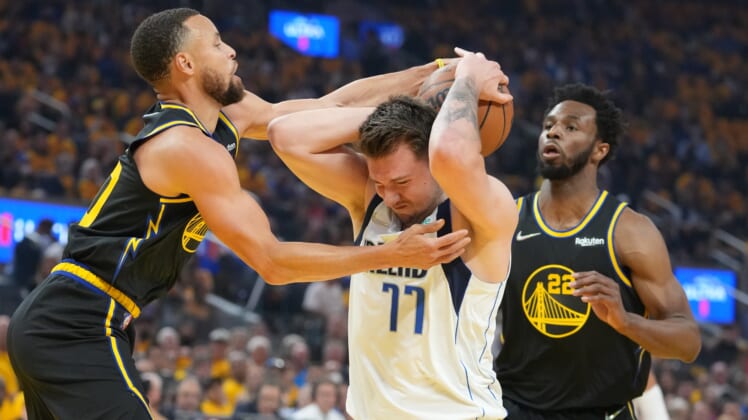 It was a one-sided affair in the first game of the Western Conference Finals matchup between the Golden State Warriors and Dallas Mavericks on Wednesday night.

Despite the Warriors heading into the event favored by just 5.5 points, the final result came nowhere close to the spread before play tipped off.

Let’s dive into the biggest takeaways from the Warriors’ 112-87 victory over the Mavericks in Game 1.

Luka Doncic is an incredible player, but he can’t do it all. Yet, sometimes he tries.

Doncic may have put up his typical numbers, coming close to a triple double, but having your lead ballhandler finish with seven turnovers is never ideal. This is not winning basketball.

When the Mavs get crushed on the glass as they did today (52-34 rebounds), every last possession becomes crucial, yet we didn’t see that sense of urgency or care exhibited from the face of the franchise in Game 1.

In all, the Doncic/Brunson combo shot 12-of-34, leading to just 34 points. It was a forgettable performance, in which they just might want to burn the tape.

Right from the tip, Andrew Wiggins was on fire, scoring 15 points in the first half. He finished just one point shy of his playoff career-high of 20 points, but his defensive effort putting the clamps on Doncic may have been one reason for his second-half fade, in addition to the game ending in a 25-point blowout.

Wiggins continued to attack Doncic on both offense and defense, and somehow, the first-time All-Star routinely got the best of the Slovenian superstar.

Oftentimes looking like the best player on the court, the Warriors have to hope to see more of this Wiggins later in the series as they continue to find unique ways to slow down Doncic.

Warriors’ depth is hard to beat

We heard it all night. For anyone tuning into the TNT broadcast, they routinely touted Thompson, Curry and Poole’s ability to move well without the ball, making themselves valuable pieces of the rotation no matter who controls the rock.

It creates all sorts of extra basket opportunities, creating easy baskets near the hoop. Why doesn’t every team coach their players as the Warriors do with off-ball movement? Not everyone has three players with the basketball IQ of the Splash Bros.

The trio combined for 55 of their 112 points, with Curry leading the team with 12 rebounds.

All five of their starters finished in double figures in the scoring column while outrebounding the Mavericks’ entire team 36 to 35. It was a complete effort all around.

It wasn’t just Wiggins picking up Doncic from full-court, the Mavs struggled to even reach the paint, with Kevon Looney and Draymond Green seemingly forming a wall to prevent easy penetration near the rim.

It led to the lowest field goal percentage by the Mavericks all postseason at 36%, clearly flustering them from the start.

Looney didn’t miss a shot, going a perfect five-for-five from the floor, chipping in two blocks, five boards and four assists, while Green’s biggest play was this nasty block to close out the first quarter.

The Mavs will head back to the drawing board for Game 2, hoping to have better luck on Friday night as they attempt to figure out a way past the Warriors’ D.